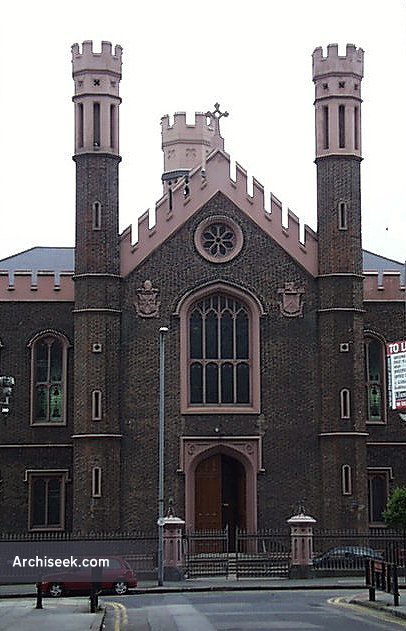 The Irish Georgian Society launched its inaugural Architectural Conservation Awards this year to promote greater appreciation of Ireland’s built heritage and to celebrate the conservation and restoration work done in recent years that has breathed life back into many architecturally significant buildings. There were two categories in the awards: one for conservation projects and one for non-CAD (computer-aided design) drawings relating to a historic building.

The standard of applications was very high for both awards and the winners were announced at a ceremony in the Irish Architectural Archive on the Wednesday, 6th October. The Conservation Award was presented to St. Malachy’s Church, Belfast, a brick Tudor Gothic, Roman Catholic Church (Architect: Consarc Conservation; Contractor: O’Neill & Brady) and the winner of the Original Drawing Award was Fergal McCabe for his elevation of the garden front of Dublin Castle. Killua Castle, Clonmellon, Co. Westmeath, (Architect: Matthew Shinnors) was also commended by the judging panel.

St Malachy’s in Belfast – a brick, Tudor Gothic, Roman Catholic Church – was built in the 1840’s to the designs of Thomas Jackson. The needs of the building included structural reinforcement and replacement of brick, a new sacristy, new arrangements for access, and redecoration. The assessors applauded the extensive but discreet work of the architects of Consarc Conservation. Craftsmen from far afield were selected with great discretion. Replacement materials were carefully chosen. Long-vanished fittings were retrieved. And early decorative schemes were investigated and reinstated. If the conservation was spared the task of adapting the building to a new use, it none the less reinforced in a practical way the original character of the building, thus revealing the quality of what C.E.B. Brett called ‘the finest late-Georgian building in Belfast’.

Killua Castle, Clonmellon, Co. Westmeath, contains the core of a fine late-eighteenth-century house, greatly extended, probably by the architect James Shiel in the 1830’s, into a turreted, castellated, asymmetrical castle. It was built for the Chapman family and inherited by the Fetherstonhaughs. When bought by the present owner it had long been a roofless shell. The task ahead of the conservators is daunting. Work already completed is impressive, involving meticulous stabilisation of the structure and consolidation of surviving fabric. The approach as outlined by the architect Matthew Shinnor is careful, ambitious and informed. Assessors were deeply impressed by what has already been achieved but felt that, in highly commending the work, so much remained to be done that at this early stage it would be premature to recommend Killua Castle for an award.