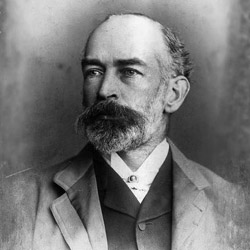 Ashlin was born on 28 May 1837, in a house named “Carrigrenane” in Little Island, Co Cork. He received his early education at the Collège de St Servais, Liège. While at St Mary’s College, Oscott (1851-5), with which Augustus Welby Northmore Pugin was strongly associated, he studied drawing and perspective and developed an interest in architecture. Between 1856 and 1860 he was articled to E.W. Pugin and in 1858 he entered the Royal Academy Schools, London.

When E.W. Pugin received the commission for SS Peter and Paul, Cork, in 1859, he made Ashlin a partner with responsibility for their Irish work until late 1868. He married Pugin’s sister Mary Pugin in 1867. In 1861 he opened their office called Pugin & Ashlin at 90 St. Stephen’s Green. Their practice was primarily ecclesiastical.

They worked on some 25 religious buildings including the Augustinian church of SS Augustine and John, Thomas Street, Dublin which was commissioned in 1860 and opened in 1874. It is in a style inspired by French architecture and is one of their most successful designs. The site drops towards the river, so that while the entrance is at street level, the nave and chancel are raised considerably above the surrounding streets, a dramatic effect enhanced by the soaring spire.

Their churches in the countryside, mainly in counties Wexford, Cork and County Kerry, are simpler, with straightforward Latin-cross plans, good quality stonework and simple bellcotes. By far the most important commission undertaken in Ireland by Pugin and Ashlin was the building of Cobh Cathedral (1869-1919). The partnership broke up in 1870 and Ashlin practised on his own.