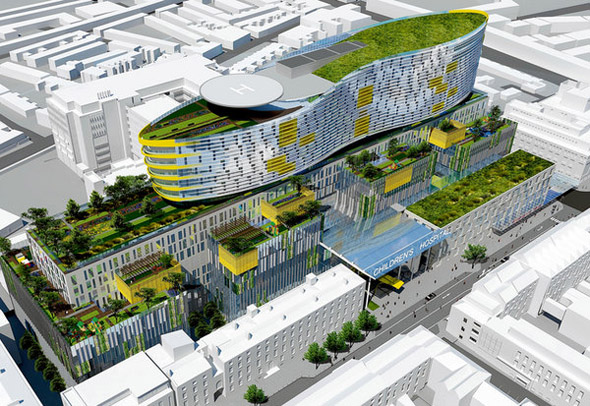 Dublin has never seen anything like the national children’s hospital planned for the Mater site. Not only would it be taller than Liberty Hall, but the crowning eight-storey element would also be twice as long horizontally as Siptu’s headquarters is high. The 16-storey hospital, designed by Dublin-based architects O’Connell Mahon in collaboration with global architects NBBJ, with earlier input from architects Murray O’Laoire, would rise to an overall height of nearly 68m (223ft), starting with a four-storey frontage on Eccles Street, with a wide entrance topped by a glazed canopy.

Behind this relatively modest stone-clad block, which is intended to repair the long gash in the streetscape caused by the demolition nearly 30 years ago of Scoil Caitríona and the Dominican College, a much larger eight-storey block would extend across the six-acre site. The architects stack the children’s wards, with outdoor spaces for recreation, in a curvilinear form that would be visible all over the city. Its shape is unusual and highly distinctive – think the insole of a shoe, except more symmetrical – and clad in glass with profiled metal “fins”.

With a helicopter pad on the roof and the top floor given over to education, lead architect Seán Mahon says the wards “will be almost a piece of magic sitting on top” of the new hospital. The design, he says, is emblematic of “the whole idea of making special places for children”.

The architects thought long and hard about what form the wards should take and “gradually moved to a more fluid building rather than something static” and rectilinear. Indeed, what they have produced is almost playful, as befits its primary purpose and youthful clientele.