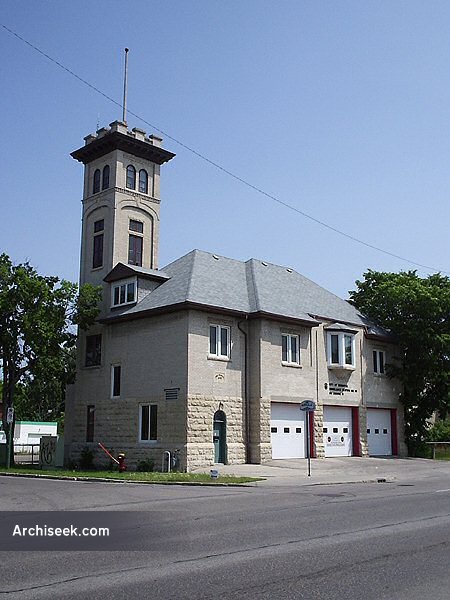 Alexander Melville was born in Fraserburgh, Scotland in 1873 and received his architectural and civil engineering degrees in Aberdeen. In 1903 he settled in Winnipeg and immediately set up a private practice. He was a member of the Manitoba Association of Architects for many years and one of its early council members from 1919 to 1920. His brother, William N., preceded Alexander to the city by a year and is listed in Henderson’s Directory as an architect. In 1903 the firm of A. and W. Melville, architects and civil engineers, began operation. This company was responsible for numerous buildings in and around the city. An incomplete list of works includes many Winnipeg Fire Halls: 349 Burrows Avenue; 66 Pearl Avenue; 410 Cathedral Avenue; 596 St. Mary’s Road; 1055 Dorchester Avenue; 825 Sargent Avenue; 470 Gertrude Avenue; 354 Sherbrook Street; 161 Lipton Street; 180 Sinclair Avenue; 56 Maple Street; 325 Talbot Avenue; 542 Osborne Street; 1470 William Avenue; all in a similar style.