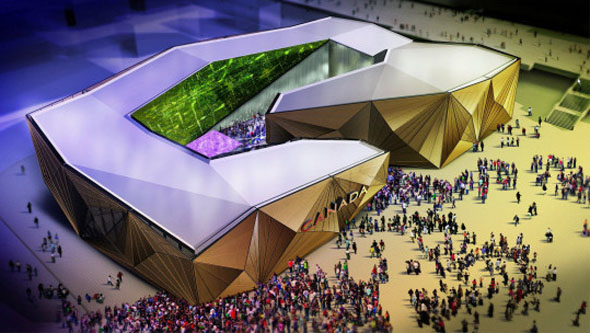 Let’s say you’re the head of a state and you’ve been given an enormous, prestigious site to advertise the creative brains of your country to about 70 million people touring through a world fair. You’re thinking, okay, showcase imagination, no need to translate. Straight away, you’re calling up compelling talent – cool video artists and aboriginal performers – and figuring out how to seal lucrative business deals in your fancy VIP lounge. Turns out your pavilion, at 6,000 square metres or almost as large as four National Hockey League rinks, is one of the biggest among the 43 nations and organizations that are building stand-alone pavilions.

Other nations launch architecture competitions and unveil their designs with much fanfare in what has become a kind of Olympics of architecture and art. Not you, Mr. Canada. You farm out the commission for the Canadian Pavilion at World Expo 2010 in Shanghai to a circus corporation. Oh, Canada. Hewer of wood and drawer of water. You dumb cluck. You allow a monumental nation-branding building to be conceived without an architect.

There are 8,000 licensed architects in Canada. But, don’t expect to find a single architecture firm’s name attached to the Canadian Pavilion in Shanghai. That’s because an in-house “creator” at the Cirque du Soleil has authored the concept. Think about it and laugh at the sad clown act we’re offering at the biggest exposition ever staged in the world.