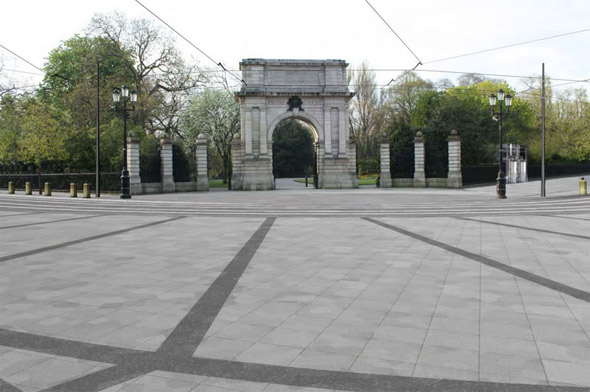 Dublin City Council is opposing a plan to use overhead power cables on the proposed cross-city Luas line because of their detrimental effect on the city’s “exceptional” and “exquisite” architecture. The Railway Procurement Agency (RPA) wants to use the same overhead power supply system on the new line, which will link the Sandyford and Tallaght lines before continuing on to Broombridge in Cabra, as it does on the existing lines.

However, the council said the proposal was not acceptable in the city centre. The route the Luas will take – from St Stephen’s Green, down Dawson Street, through College Green, across O’Connell Bridge, and up O’Connell Street to Parnell Square – passes the city’s most significant public buildings, it said. College Green in particular consisted of a “progression of exceptional classical buildings”, including the “exquisite” portico of the Bank of Ireland, which should not be compromised by cables and wires. Comparisons made by the RPA in relation to the wiring used by early 20th century trams in the city centre were “not an argument of weight” in the context of best-practice building conservation, the council said.

The RPA should provide an alternative wire-free system, the council argued. It said it was in favour of the overall project but it urged An Bord Pleanála to make it a condition of the railway order that St Stephen’s Green to Parnell Square be a wire-free zone.