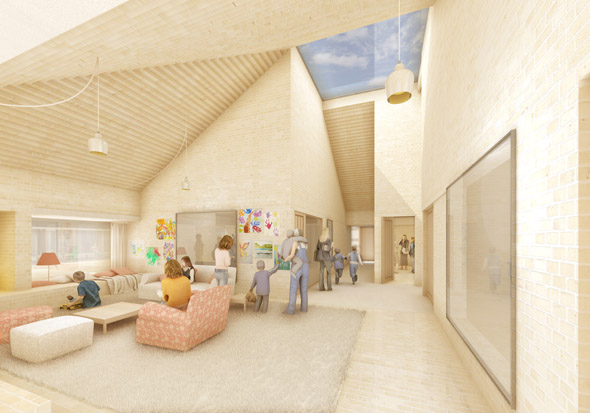 Aoibhneas, the Women’s and Children’s Refuge in Coolock, Dublin and the Royal Institute of the Architects of Ireland (RIAI) today announced the winners of an International architectural competition to design the first ever Irish specialist children’s centre in a refuge. The idea of a specially designed children’s centre for a refuge came from Aoibhneas’ concern about the impact of violence in the family on children and in response to a recent spate of killings of women and children and the subsequent suicide of the male perpetrator. In-depth research commissioned by Aoibhneas confirmed the need for specialist supports and related facilities for families.

The top three designs in the competition won prizes totalling €30,000 with the winning design going to Burke Culligan Deegan. The presentation to Burke Culligan Deegan was made by Ms Terri Morrissey, Chairperson of Aoibhneas, and Mr Paul Keogh, President of the RIAI. Mr Declan Collier, CEO of the Dublin Airport Authority, praised the initiative in providing a specifically designed centre for children within the refuge and for promoting the innovative project.

The unique children’s centre will be built on the Aoibhneas site and a major campaign to build the €1m centre was also launched today. Terri Morrissey said: “Aoibhneas wants to pave the way in changing how the refuge works with children in Ireland, to become a place that truly supports children through the traumas of domestic violence, by creating a specialist children’s centre where children can reclaim their childhood, can trust again and feel safe.

“Paul Keogh said: “I commend Aoibhneas for their choice of an architectural competition to find the best solution to the brief for this specialist children’s centre. The RIAI was very happy to work with Aoibhneas, manage and coordinate the competition process, which demonstrates the talent, innovation and creativity of architects, both national and international.

Declan Collier said: “The DAA was delighted to have been able to offer technical expertise to Aoibhneas in relation to the architectural competition to design a new centre for children. The creation of a refuge for children is a hugely laudable goal and the company is proud to support this project on the doorstep of Dublin Airport.”

The three shortlisted entrants were:

Burke Culligan Deegan Architects’ entry was selected as the winner by the jury, as it most answered the brief with regard to private/semi-private and public spaces and age appropriate areas for children. The concept behind this design solution was “˜the creation of “rooms” both internal and external; places to be alone, be together and to grow.’

Those working in refuges speak of children adopting adult responsibilities at very young ages, effectively becoming protectors of their mothers and siblings. These children need help themselves in order to be able to reclaim their childhood, to develop strong and positive relationships with their mothers as well as with others in the outside world.

The Childcare Leader in Aoibhneas made the following comments: “before coming to the refuge mothers experiencing domestic violence are often totally taken up with their own survival, They often cannot see the enormous effects such situations are having on the their children. With support and space in a refuge such families can open up to each other in safety and can develop strong bonds that will stay with them as they move on with their lives’

“A family arrived in the refuge recently- a mother, a teenage daughter and three younger siblings. The daughter was suicidal. She was worn out trying to protect her mother and her younger brothers from her father’s violence and could take no more. There were so few services available for her. It really affected all the staff to see her situation.”

A client of Aoibhneas who has lived in the refuge said: “when we came to the refuge first my children were withdrawn, afraid to say anything and uneasy sharing with other children. Now they feel safe, they are calm and can relate well to children in school. We laugh together. However we feel guilty using up the current playroom space to spend time on our own as a family with our childcare worker because we know that during that time other children, mothers and childcare staff have nowhere else to go because of lack of space in the current facility.”