Aviva wows with her glorious curves 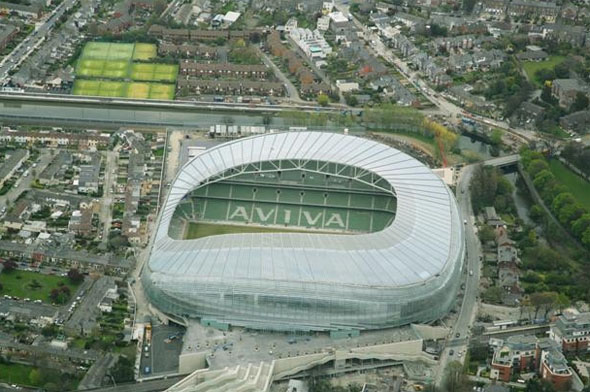 The collective gasp the IRFU and FAI had hoped for when showing the media around the new Aviva Stadium on Lansdowne Road this morning never quite materialised, primarily because, for many, it was a case of “˜been there, bought the giant inflatable hand’. While the €410 million project is undoubtedly an impressive sight, a typically pessimistic press corps cannot help comparing it to the likes of Arsenal’s Emirates Stadium or Bayern Munich’s Allianz Arena. Both hold in excess of 60,000 and, though it seemed impolite to ask out loud, some voiced misgivings as to whether south Dublin’s new 50,000-seater would stand the test of time.

The IRFU’s chief executive Philip Browne certainly seems to think so and boldly proclaimed as much when the media were ushered into the plush surroundings which he predicts they will become increasingly familiar with over the next four decades. The capacity is “bang on for us,” he said of the structure he believes will be the “financial engine” that will “drive the sport for the next 40 years”. FAI chief executive John Delaney later revised that to 50 and added: “I have no doubt that this stadium will bring revenues to rugby and soccer that they’ve never had before. We can attract competitions that we have never been able to do before.”