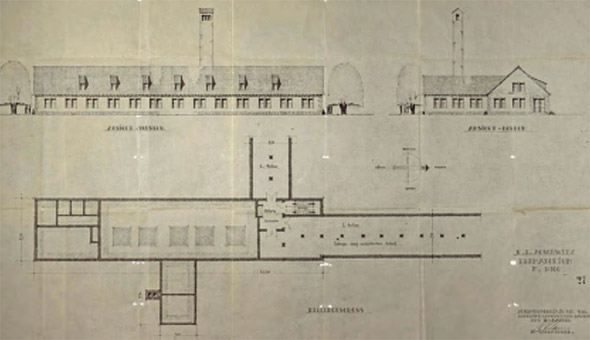 This exhibition, originally presented at the United Nations Headquarters in New York for International Holocaust Remembrance Day 2010, features the blueprints with which the SS architects planned the Auschwitz and Auschwitz-Birkenau camps, and the photos that the SS made to record the progress of the construction of the barracks, auxiliary buildings, and the crematoria. Auschwitz and its satellite Auschwitz-Birkenau, built by the SS in occupied Poland, formed the largest and most important concentration and extermination camp complex. During its operation between June 1940 and January 1945, the German Nazis murdered 1.1 million people there, 90% of whom were Jews. Most of the victims were killed in Auschwitz-Birkenau in gas chambers and crematoria designed by professional architects and engineers. The deadliest of the German death camps, and the most sophisticated in its killing technology, Auschwitz-Birkenau became a symbol of the Holocaust.

The exhibition shows material from the collection of Yad Vashem in Jerusalem. The six architectural plans are a representative sample of a collection of 28 construction drawings for Auschwitz discovered in Berlin in 2008, purchased and published by the German newspaper “Bild” and donated to Yad Vashem in 2009.

The exhibition is a production of the Museums Division, Yad Vashem, and will be held at the Irish Architectural Archive, 45 Merrion Square, Dublin 2; 19th November-17th December 2010; Tues-Fri 10am-5pm.

The illustration shows an early blueprint of crematorium II, dated November 1941, showing two elevations and the basement. Designed to be built in Auschwitz, this incineration installation with 15 ovens and a daily capacity of 1,440 corpses was to accommodate the “normal” mortality of the Auschwitz complex. When in July 1942 Himmler took the decision to transform the Auschwitz complex into an extermination camp, the SS decided to build in Birkenau two of these crematoria (numbered II and III), and to transform the spaces that were intended as morgues or corpse cellars (indicated in the basement plan as L[eichen]-Keller), into an undressing room and a gas chamber. In addition, the SS built also two smaller crematoria equipped with gas chambers (number IV and V).