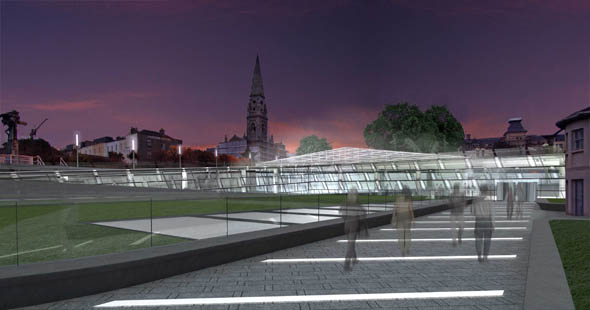 Moran Park has strong pedestrian routes across and around its edges. It also acts as a setting for the Royal Marine Hotel and the adjacent Mariners Church. It is not immediately obvious how a major building could be placed sensitively within the park without damaging its amenity value.

Developing the linear library along the edge of Moran Park produces a tall massive building which blocks views to and from the surrounding context. It also creates significant overshadowing of the Park whilst altering the existing Victorian skyline.

We have organised the library to utilize the 6 metre level drop between Haigh Terrace, Moran Park and its Pond. The library is organised to maintain existing views and vistas to and from the site whilst creating a two tiered Park.

The new library develops the routeways across Moran Park via a series of ramps and roof top terraces. It also creates new linkages and vistas to Dun Laoghaire town centre. The library provides accessible Routeways from Haigh Terrace to the lower Moran House via the ramps or internally via new lift cores.

Click to enlarge
The library is lit from a roof top skylight which acts as a dramatic beacon at night signaling the library’s core to the passer by. It also provides dramatic new vistas to the Mariners Church and across Dun Laoghaire Harbour from its terrace café, bookshop and entrance.

The library is clearly organised on two major floor plates, lit by a central atrium and perimeter glazed walls. The floors are flexible in that in that their adjacencies can be developed, attached and adapted according to evolving brief requirements. The cellular accommodation is grouped to feed into the library plates creating excellent adjacencies between public and private uses throughout.

The library is part of a broader network of knowledge both locally, nationally and internationally and as such it must constantly change and adapt to the society it serves. A library whilst being open and transparent for its users must balance permeability with security.

A modern day library is dominated by a rapidly changing Information Technology world. Books are stored in basements and automated retrieval systems deliver books directly to the reader. Some of the magic of browsing and discovery of information has been lost. The library is a retreat within the city. It is a glazed slot that is revealed by stealth when passing through the park. Its role is to both contain and to offer knowledge via differing media. But it also much more”¦.

The library floor is likened to a forest clearing; the glazed canopy filtering, protecting and adapting to the sunlight for the organism below. It is a great departure hall under a glazed canopy. The Library has layers of information and activity all reaching for the sky. Our library should also be about the smell and touch of books. It should be an inspirational form for our youth.

The bowling green relocation is fundamentally required for any building of this scale and as such we have taken a long term view of how the park should operate as a whole rather than an interim solution which would constitute poor future master planning.

The boundaries illustrated in the competition suggest that the bowling green will be relocated “eventually” as discussed in the brief. We felt that the overshadowing of the green would seriously destroy its amenity value in any case. In our design analysis we felt that even if the library were to locate strictly within the blue line boundary, that the adjacent bowling green would be devastated due to construction access.

Our proposal, whilst taking the bowling green away, places the library into arguably the least visually sensitive part of the site i.e. the pond. Its debris level is some 9 meters below the upper Haigh Terrace access allowing the considerable bulk and mass of the library to be concealed making minimal impact on existing vistas and views. It allows the library to be organised primarily on two major floors allowing excellent future flexible adjacencies. Consequently we would argue that the building operates much better and in doing so it allows the park to be reinvented as a two tiered space which connects to the townscape seamlessly.

The library is in a conservation zone. The Royal Marine Hotel to the south, whilst obscured largely by trees, overlooks the park to the harbour side. It is an important element in defining the skyline from the harbour edge. The adjacent Haigh Terrace is part of a strong building line which follows the coast to be broken by the Pavilion development. We have chosen not to challenge this building line and preserve their views across the bay. The existing vistas to the Maritime Church across the park are dramatic and should be retained. These are maintained as a series of new pathways across Moran Park and the Library itself. New routeways link across the park to the centre of Dun Laoghaire new axes and vistas are celebrated.

The Library is defined by its central hall. It is a top lit atrium which is filled by movement. It will be animated by the seasonal skies. Individuals and groups will constantly fill this space with movement.

Book stacks and remote storage will be organised in the deeper plan areas around the atrium allowing readers to inhabit the clearings edges. The glazed hall is a hall for everyone. Its central timber tree supporting the glazed canopy above: its base will be the clearing within the forest. The base of the tree trunk is a seat. It is that seat which allows a place for the story teller or poet. It will be the library’s heart.

Daylight will be filtered into the Library from unexpected slots and slices, creating magical reading areas away from the clearing open canopy.

The Library has many differing atmospheres for the reader. Individual areas will evolve which allow for more secluded study. Glimpses and views of the park will allow retreat to the edges from the central clearing.

The Library will enjoy the shade. Task lighting will shimmer like candle light in the dusk. The Library at night will be a candle lit room within the park.

The Multicultural Centre is directly accessed from the lower portion of Moran Park. Its deep plan spaces are flexible boxes which can be combined in differing ways for differing events. It is intended as a distinct function with a separate identity. Its roof, the new Moran Square, will be part of the new promenade along the bay. Skylights will allow glimpses into the rooms below. At night they will form part of the lighting for festival activities in the space.

The square is seen as an integral meeting and performance space for festivals such as the Dun Laoghaire International events.

All offices are grouped together on the eastern edge of the library. All working rooms overlook the adjacent park and are grouped together to benefit from common adjacencies and functions. The office and ancillary wall feed into the main library and Multicultural level at three main floors and as such there are excellent direct adjacencies between the private and public functions

The building should be seen as a landscape. Its accessible roof terrace can be used as a platform to view the sea. Its new square, at the front of the Library, provides an appropriately scaled plaza for the existing context. The park has grown. The upper street is now part of its landscape. It is not a left over space – it is integral to the new pathways through the landscape. Water is replaced on the Library’s roof. The whole Library is seen as part of a water garden.