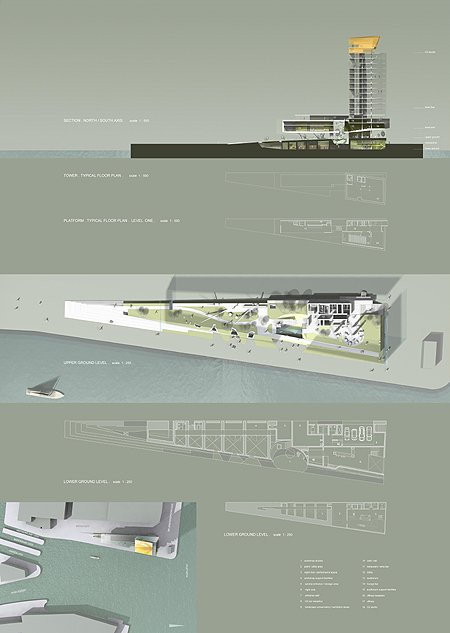 The new building is cast as protagonist, standing out from its neighbours not because of its scale but by virtue of its location, sculptural qualities and materials. But we understand that it will only become a landmark when, having shed its novelty and inexperience, it comes to form part of the mythology and the memory of the Dubliners. For this to be achieved the activities generated in and around the building must attract the flow of people necessary for the creation of a real sense of place.

A monolithic form is fundamental in establishing this presence and is generated by a crystal envelope that wraps around the building, enclosing the individual functions which in their own turn are identifiable through volumetric play and by the material cladding of their walls: deep grey steel for the auditorium, silver aluminium for the restaurant and other social spaces, glass for the office floors and dark gold for the recording studios at roof level; their rich neutral colors and marked materiality are viewed through and transformed by the pristine qualities of the multiple layers of glass.

The resulting sculpture-like quality of the building is defined further by the lower floors, which contain the public spaces dedicated to social and cultural interchange. These are lifted above and hover over a man-made green landscape, which is sloped gently towards the south and the east, exploiting the sunny aspect of the site. The visitor is exposed to the view of the external areas but protected by the glass outer wall, which turns the lower part of the building into a giant conservatory, a warm green space for the winter months. The under-belly of the first floor is clad in reflective panels accentuating the feeling of enclosure and integrating covered space with landscape both in terms of space and activity. All public spaces communicate visually with each other: the underground studios are accessible to the public, who can drift in to enjoy rehearsals, the restaurant is open to the views and is visible from below becoming a theatrical experience in itself while the nightclub is a double height flexible space doubling up as a performance space open towards the sea.

The gravity of the lower building with its spaces that hug the ground serves as a base for the airy and lighted stories above, where structure forms the spine of the building from which all floors are hung, eliminating the need for structural elements at the corners. Here office space enjoys maximum light and views with a double glass skin to provide a suitable passive climate control system exploiting warm air during the winter season and the creation of cool air convection currents during periods of warm weather. The climatic efficiency of the building is further aided by locating the vertical circulation core on the west side in such a way as to protect the building from the prevailing winds. The sharp crystal qualities of this glazed tower are accentuated by its dynamic rhomboid plan, an acute angle pointing out to the entrance of the harbour.

The recording studios are clad in dark gold aluminum and provide an ending to the building. They recede at roof level to create roof terraces, which are in their turn defined by the high glazed parapet wall extending from the external outer skin below. This is the only part that breaks through the glass skin of the building to which it is connected by the common spine. Their aloof position does not mean that the studios are isolated from the creative activities below, but rather, as a result of their visibility, participate with and provide a stimulus to them.

In this way alone will the new building become a beacon for the area, standing like a heroic figure witnessing the life returning to this part of the city. Only when it has accumulated the fortunes and survived the pitfalls of the passing of time, and having stored it all in the memory of brick and mortar, steel and glass, will it become that silent tall figure that looks out towards some point of the city and the sea that only he, being thirty times taller than those around him, can see.

This desired figure is the genius of the city, its guardian angel; the all-knowing and forgiving mentor of its inhabitants.