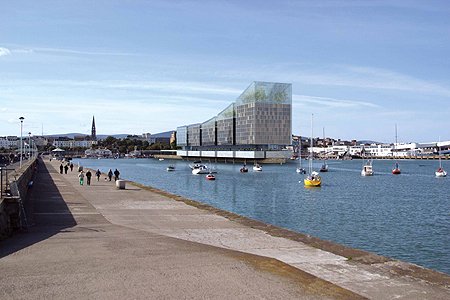 The proposals have been designed by major Irish and international architects to comply with the zoning requirement for the site to have an “exceptional landmark building of international architectural quality”. The planning criteria for the site also stipulate that each proposal must include a cultural attraction of national importance and significant public access with walkways and viewing areas throughout the site. This scheme’s design concept is of five interconnected glass modules that straddle the existing pier, and which, with the gentle rising curve and inverse perspective of the new building, create a new form within the harbour. The 40m disjoint from the shore respects the Victorian scale of the town and of its single storey yacht clubs.

On 30 March 2004, Dun Laoghaire Harbour Company selected Urban Capital / heneghan.peng.architects as their preferred bidder in its competition to redevelop the derelict Carlisle Pier.