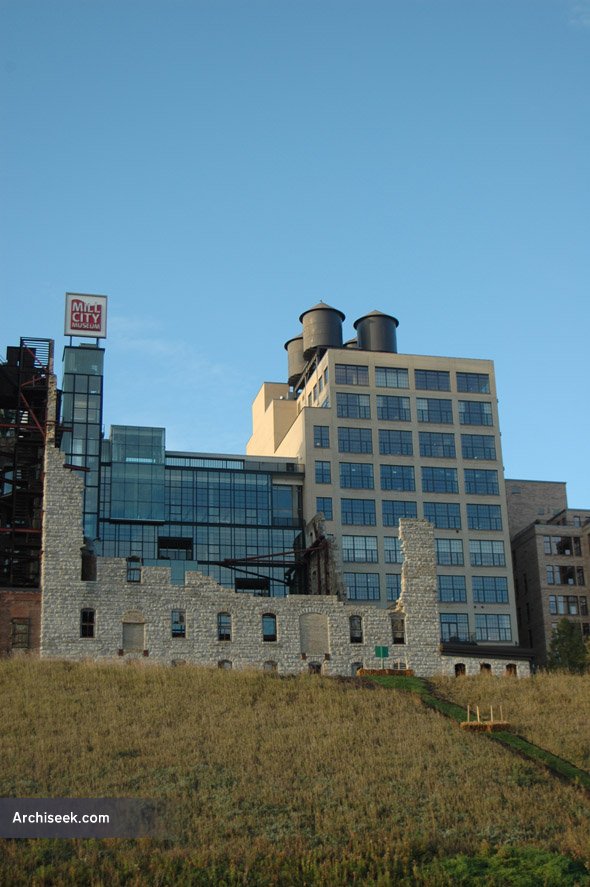 Built into the ruins of what was once the world’s largest flour mill, Mill City Museum is located on the historic Mississippi Riverfront. The original A Mill, built in 1874, was leveled by a flour dust explosion that claimed 18 lives. That explosion and the resulting fire destroyed much of the riverfront business area, cutting Minneapolis’ milling capacity in half. The A Mill was rebuilt by 1880, with state-of-the-art machinery that permitted safer operations while producing higher quality flour. At the time it was the largest and most technologically advanced mill in the world, featuring new automatic steel rollers instead of traditional millstones. During its heyday, it was said that the mill ground enough flour to make 12 million loaves of bread a day. As technology and consumer preferences evolved, the A Mill became obsolete, and was shut down in 1965. In 1991, it was nearly destroyed by fire. During the late 1990s, the Minneapolis Community Development Agency cleaned up the rubble and fortified the walls. Shortly thereafter, the Minnesota Historical Society announced its plan to develop a museum on the site.

Faced with the challenge of preserving the ruins of this historically significant site while building a modern museum, the Society turned to Thomas Meyer, principal of Minneapolis architectural firm Meyer, Scherer & Rockcastle, Ltd. Meyer developed a concept that melded the historic integrity of the mill structures with modern components. Construction on the museum began in March 2001.

When possible, Meyer’s design has left intact many features of the original mill, including flour bins, milling machinery, the engine house, rail corridor and a wheat house. He also has used limestone, brick, concrete and steel within the museum to emphasize its industrial origins.

Among the new architectural features is an eight-story glass facade overlooking the Mississippi River. True-to-scale graphics of the milling machines are featured on the glass façade to give visitors an idea of how massive the milling operation was. The facade forms a reflective backdrop for the courtyard a 100-by-100 foot outdoor area with weathered masonry walls, that was created by the 1991 fire. Ruins of the historic mill are showcased in the courtyard through significant excavation efforts.