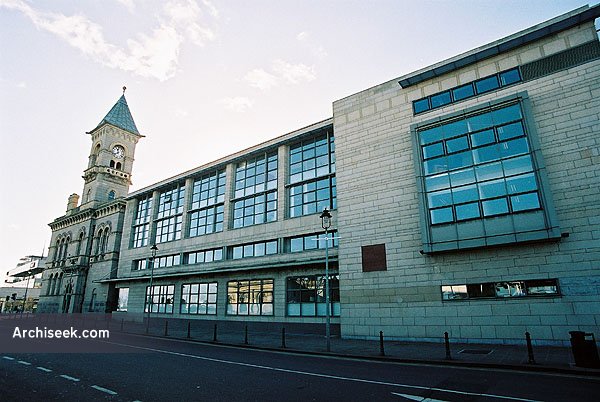 McCullough Mulvin Architects design were selected following a competition organised by the RIAI, which attracted 37 entries at the first stage. These were then reduced to a shortlist of five designs, including the winning entry. The winning plans were organised around a central, top-lit public concourse, which was surrounded by a glazed, atrium-like area. This central ‘courtyard’ was to be enclosed on the east by the original Town Hall and post office and on the three other sides by three new wings, themselves arranged in a pinwheel plan.

A unashamedly modern building attached to the old borough town hall, this is the new seat of administration for the county of Dún Laoghaire-Rathdown. Acclaimed for the sensitivity shown to the old townhall, the new county hall continues on the parapet line and other horizontal string-courses of the older building. The use of a granite-clad façade also helps to tie the two disparate designs together.