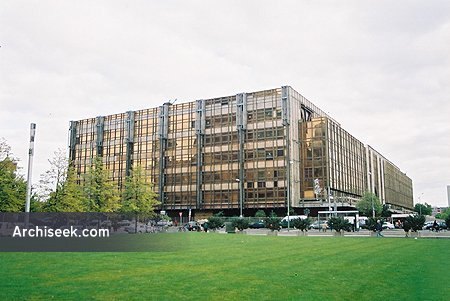 The modern Palast der Republik rose on part of the site of a Berlin palace between 1973 and 1976. A vast building with a facade of over 180 metres long, it was originally clad in white marble and nicknamed the “House of a thousand windows”. It was both a popular events venue and also the seat of the “Volkskammer” (People’s Chamber), the GDR’s parliament, but was closed in 1990 under the last GDR government due to asbestos contamination. It was stripped down to an empty shell between 1997 and 2002 as the asbestos was removed. It was demolished in 2008.

There are people in Berlin who would like to see the previous palace reconstructed on the site. The previous building was demoilished in 1950 and was a grand baroque affair. Originally designed by Andreas Schülter and Johann Friedrich von Eosander, it had a later dome by Friedrich August Stüler based on a design by Schinkel. Until the 1930s no building in Berlin was allowed exceed the height of its lantern.