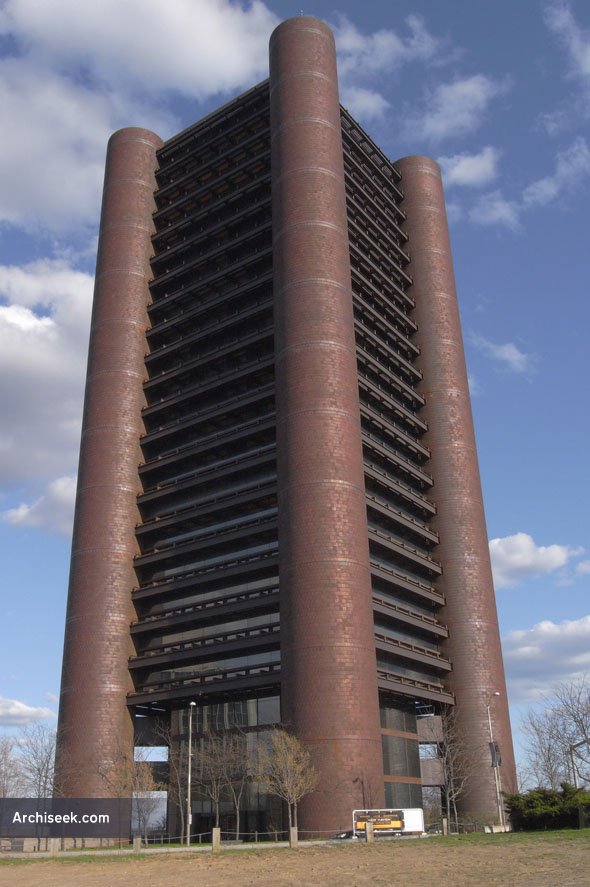 The Knights of Columbus Building is the headquarters of the Roman Catholic fraternal service organization, the Knights of Columbus. This 23 story modern style reinforced concrete building is 321 feet tall. The cylindrical towers at the corners give the structure a simple geometric form and resemble a fortress – an intentional design. The building was next to the New Haven Coliseum, designed by the same firm, which was demolished in 2007.

“A 23-story office building primarily faced with glass shaded by massive overhangs of weathering steel, it has at its four corners tile-sheathed, circular concrete columns that contain lavatories and fire stairs and, in conjunction with the building’s elevator core, support its structural girders. Steel overhangs are omitted from its more gently handled bottom three stories.” “” from Sylvia Hart Wright. Sourcebook of Contemporary North American Architecture: From Postwar to Postmodern.

“The form of the 23-story tower building is derived in part from the construction method in which continuously poured concrete shafts were first erected full height. Primary steel spanning members were then placed in pockets in the corner pockets in the corner towers and secondary members were laid on these and attached into the elevator core.” “” from Yukio Futagawa, ed. Kevin Roche, John Dinkeloo, and Associates, 1962-1975.