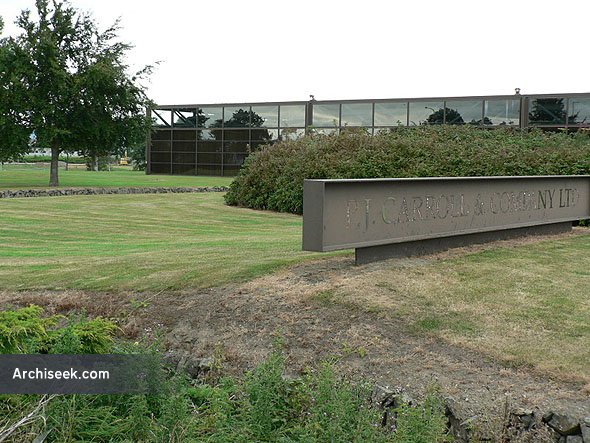 Now part of the Dundalk Institute of Technology’s campus, this was a ground breaking Irish factory design. Built by P.J. Carroll & Co. as a cigarette plant, the design by Ronnie Tallon is in the Miesian idiom. It’s setting in landscaped grounds contrasts with the rectilinear forms of the building in a way in a way that doesn’t happen with the larger and later Bank of Ireland Headquarters in Dublin. Here the landscape presents the building to the viewer.

The factory section is clad in brown brick to the front and rear, though the distinctive glazing continues around the top. A large rolling hill cleverly conceals part of the industrial aspect of the building. The four slender brown chimneys that line this southern part of the site have since been reduced in number to three, and have unfortunately been clad in a shiny metallic material.

Louis Le Brocquy’s first Táin tapestry was commissioned by the architects Scott Tallon Walker for the factory. While the subject of the Tain may not immediately relate to cigarettes, the location of the factory is close to the legendary action of the epic, so that the artist chose the theme to relate the local mythology. The Táin, which is an Irish word meaning “hosting” or gathering of a large crowd for a raid, gave the theme of the tapestry. It is a very large work with its surface completely covered in multi-coloured heads, all facing the spectator.

The fine sculpture to the front was designed by Gerda Froemmel, and was restored in the mid-1990s. It stands in the centre of a still pool of water, over which a bridge spans to the main entrance. This leads through to a grand reception hall which housed some noted pieces of modern art (there was also a model of the building in there at one stage).