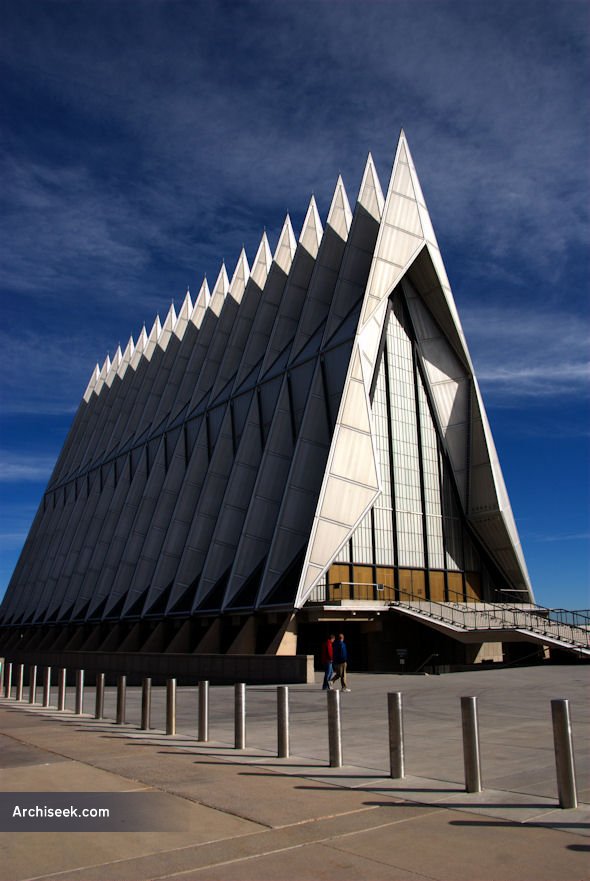 Designed by architect Walter Netsch of Skidmore, Owings and Merrill, and controversial in its design, the Cadet Chapel has become a classic and highly regarded example of modernist architecture. The Cadet Chapel was awarded the American Institute of Architects’ National Twenty-five Year Award in 1996, and as part of the Cadet Area, was named a U.S. National Historic Landmark in 2004.

The Cadet Chapel was designed specifically to house three distinct worship areas under a single roof. Netsch stacked the spaces on two main levels: the Protestant chapel is located on the upper level; while the Catholic and Jewish areas and one all-faiths room are located beneath it. Beneath this level is a larger all-faiths room and two meeting rooms. Each chapel has its own entrance, and services may be held simultaneously without interfering with one another.

Netsch took inspiration from several sources, including the Basilica of San Francesco d’Assisi in Italy, Sainte-Chapelle and Notre Dame in Paris, and the Cathedral of Chartres. “I made an enclosure that embodies the concept of light and space,” he once said, “endowed with lofty grandeur.”

The Cadet Chapel itself is 150 feet high, 280 feet long, and 84 feet wide. The front facade, on the south, has a wide granite stairway with steel railings capped by aluminum handrails leading up one story to a landing. Due to cutbacks in the original construction specifications, the building has leaked for most of its life. Costing three million dollars originally to construct, a permanent fix is estimated at thirty million dollars.