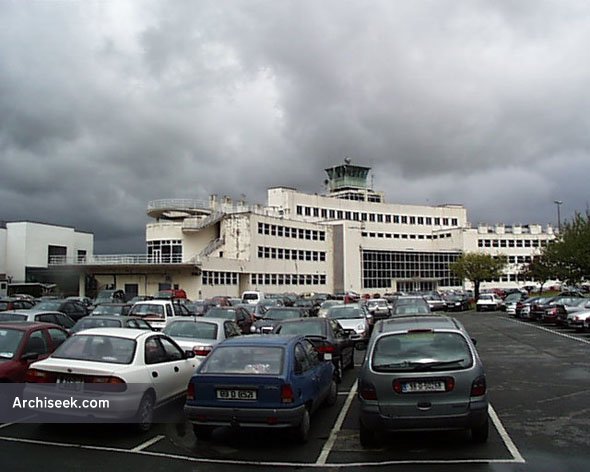 The original Dublin airport teminal was the most important pre-war Irish building in the International Style. Designed by a team of architects within the Office of Public Works led by Desmond FitzGerald, the design was more or less complete by 1937 and the building completed by 1940. The team comprised Dermot O’Toole, Daithi Hanley, Charles Aliaga Kelly, Kevin Barry and Harry Robson. Because of wartime reporting restrictions in Ireland, the building details were never published until 1945. This meant the building never got the recognition that it deserves.

The building is curved in plan with circular ends reminiscent of work produced in Holland in the years before the war while the curved plan is reminiscent of the airport at Hamburg built in 1930. The outer or longer curve faces the airfield while the inner curve embraces the incoming passengers. The buildings curved form, curved ends and stepped floors give the building a more finished look than if the ends had simply been cut straight as happened with Hamburg. The open balconies that are present on two levels of the design were for many years open to the public and proved very popular as did the large restaurant with a view of the airfield.

Indeed for a time, dances were held in the airport at night. The balconies were eventually closed for security reasons. Internally, the entrance foyer was a large double height space placed centrally in the building, with offices and facilities laid out symmetrically to either side. The airport was conceived as a piece of total design like Busáras ten years later, with the architects choosing the fabrics, cutlery and menu cards.

According to many contemporary architects, FitzGerald was not the main author of the design but rather the young team of architects working for him. After Dublin Airport, FitzGerald never produced anything of comparable quality again. Although now dwarfed by its larger and less distinguished terminal neighbour, the old terminal has been restored and is now in use as offices and departure gates. It won the RIAI Gold Medal for 1938-1940.