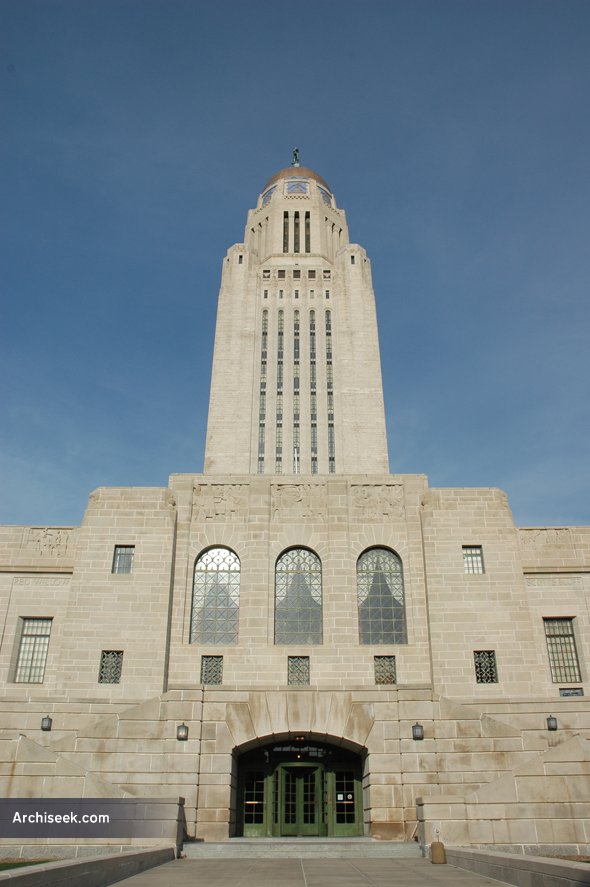 The building was designed by Bertram Grosvenor Goodhue as a result of an architectural competition and constructed between 1922 and 1932. The Indiana limestone structure draws on both Classical and Gothic architectural traditions, but represents major innovations in state capitol design.

The building is Nebraska’s third state capitol building. Both the first and second, completed in 1869 and 1889 respectively, had structural problems. The 1889 building was a classical design by the architect William H. Willcox. Preceding the Lincoln state capitol buildings were two capitols of the Nebraska Territory in Omaha, both built in the 1850s, before Nebraska was admitted to the Union in 1867.

The architectural competition program was written by Omaha architect Thomas R. Kimball, who was then president of the AIA. The competition guidelines were innovative and progressive because they did not define plan, style, or material for the building. The program did specify, however, that they wanted an architect who would assemble a team (including sculpture, painter, and landscapist) to create a unified vision. Firms competing included McKim, Mead, and White, H. Van Buren Magonigle, John Russell Pope, Paul Cret and Zantzinger, Borie and Medary, and Bertram G. Goodhue, who was not originally considered for the competition. After he was allowed to enter the competition, however, Goodhue was selected as the winner. His design drew on the Classical principles of austerity, abstract geometrical form, and hierarchical arrangements of parts, but broke away from the columns, pediment, and dome formula.

The sculptural elements of the building were designed by sculptor Lee Lawrie. Hartley Burr Alexander, a Lincoln native and professor of philosophy, served as “thematic consultant.” It was Alexander’s influence that led to the strong American Indian symbology, despite the wishes of Goodhue. Being from the East Coast, Goodhue was not the most sensitive or understanding of American Indians. He felt that the incorporation of Indian designs into the Capitol would make the building look like a tipi and would therefore be “ruinous to the architectural design.” However, in April 1924, two years after groundbreaking, Goodhue died. The sudden death of the architect allowed Alexander to exert greater influence over the artistic designs. Thereafter the Indian images were incorporated to Alexander’s liking, despite the stance taken by the late architect.

The tower is crowned by a golden dome with a 5.94 m (19.5 ft) sculpture of “The Sower,” by Lawrie, which faces northwest (most of Nebraska is north and west of Lincoln). The dome is symbolic of the sun, and its reflective surface changes color with the weather. The frieze around the drum depicts thunderbirds, an American Indian symbol of thunder. Altogether, the golden dome, Sower, and drum represent weather and agriculture.

Hildreth Meiere, a New York-based tile and mosaic designer, working with Alexander, was responsible for much of the original interior design. She collaborated closely with the Guastavino Company of New York to create the elaborate tile vaulting, which is both structural and decorative.