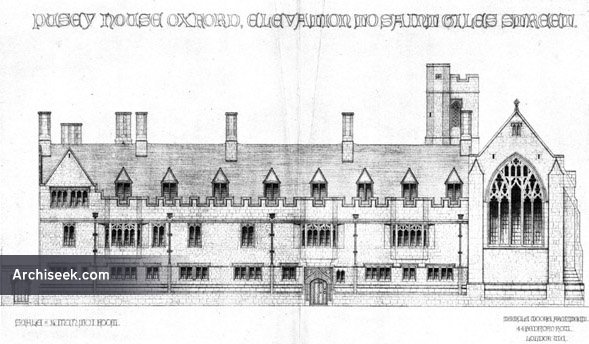 Elevation to St. Giles Street published in The Architect, February 25th 1916. In 1884 the “Pusey Memorial House” was founded in memory of Edward Bouverie Pusey (1800-1882), one of the leaders of the Oxford Movement. The main purpose of this memorial house was to make Dr Pusey’s large theological library the centre of a “house of sacred learning”. Over the years it continued to expand by obtaining three smaller houses to the north on St Giles’ Street and demolishing them to make way for their chapel and the first part of the library. In 1918 Pusey House largely demolished its original old premises at Nos. 60 and 61 St Giles’ Street to make way for the second phase of their library, including the frontage to St Giles shown above. The buildings were designed in the late Gothic Style by Temple Moore, to the modified designs of his father-in-law Temple Moore.

In 1981 St Cross College (founded in 1965 and then based in temporary accommodation to the south of St Cross Church in Manor Road) took up a 999-year lease for the southern part of the Pusey House site, and it became a full college of the university in c.1990. Pusey House Chapel and Library to the north continues in its original tradition.