1893 – Design for Brooklyn Insitute of Arts and Sciences, New York 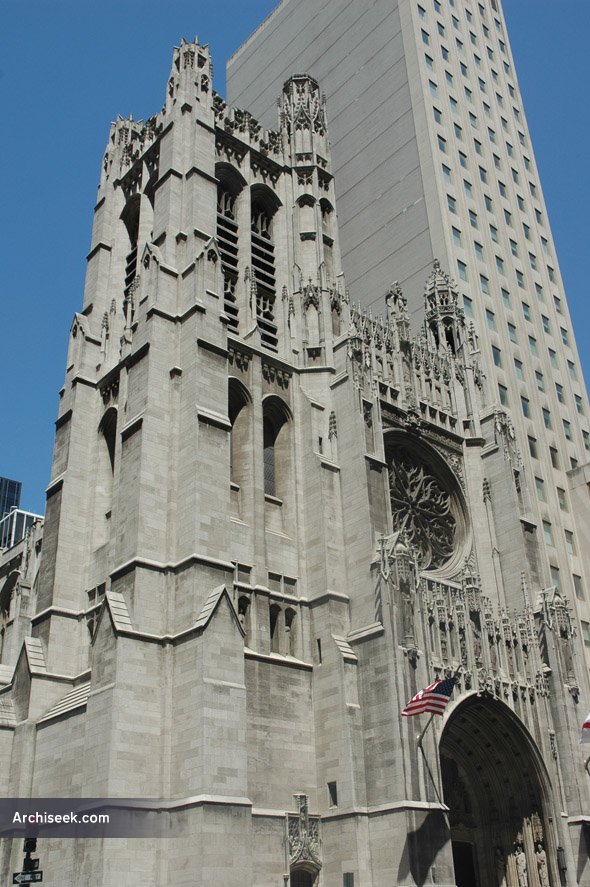 St. Thomas Church, a designated New York landmark, was built from 1911 to 1913, designed by Ralph Adams Cram and Bertram Grosvenor Goodhue, and was their last project together before their partnership split. The church, with bold massing and a strong profile, has plain ashlar limestone exterior surfaces and sandstone interior surfaces in French High Gothic style, embellished with dense French Flamboyant Gothic detail in the window tracery, in the small arches of the triforium, and in the rich stonework of the reredos, where Bertrand Goodhue’s original genius in decoration, and sculpture designed, by Lee Lawrie, are inspired by the altar screen at Winchester Cathedral in England.

The church, like New York’s Cathedral of Saint John the Divine, whose nave and west facade were designed by Cram, is built of stone on stone, without any steel reinforcing. The ribs of the vault are load-bearing structure. Cram’s approach to a structurally authentic and a scholarly, but not imitative Gothic style, emphasized originality through logical development of the historical Gothic styles, tempered by creative scholarship and employing the use of modern machinery in the execution of stonecutting and dressing. In a letter of 1925 Cram said that he considered a rigorous modern Gothic to be “a logical continuation of the great Christian culture of the past, but also a vital contribution to modern life.”