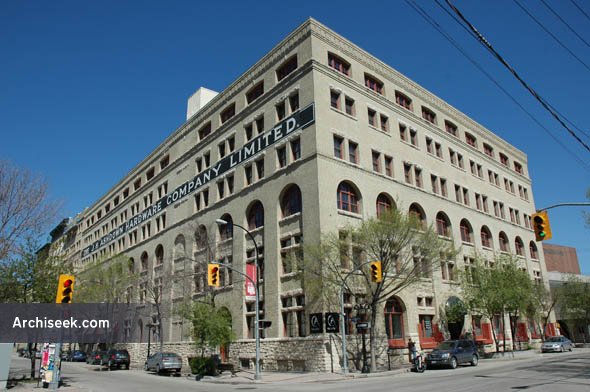 The English-born James H. Ashdown was probably Winnipeg’s best-known businessman and he first arrived in the Red River settlement via Ontario in 1868. He purchased a tinsmith shop in the following year, then relocated his buisness to Main and Bannatyne in 1871. Ashdown’s entrepreneurship and success in real estate speculation made him a millionaire becoming an alderman in 1874 and 1879 and mayor in 1907-08. He held many directorships and was the founder and governor of Wesley College. Ashdown made his fortune in the boom caused by the settlement of western Canada and used innovative marketing to establish stores and warehouses in the four western provinces both wholesale and retail.

This Richardson Romanesque warehouse, originally four storeys, was constructed at the corner of Rorie Street and Bannatyne Avenue with a rail spur behind it connecting it to the main line. The J.H. Ashdown Company’s own train, the Ashdown Special, distributed hardware throughout the Western Canada from the warehouse. Loading bays also allowed for road vehicles along the Rorie Street frontage. As the business grew, so did the warehouse with additions made in 1899, 1902, 1906, 1908, and 1911. Recently, the building was converted to residential use.