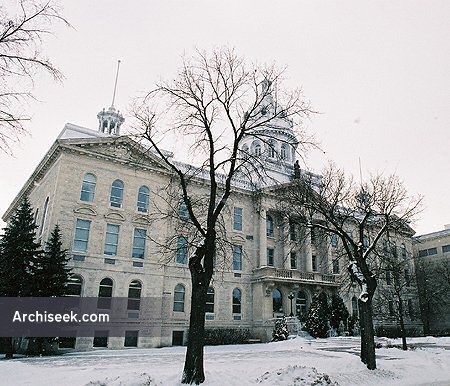 The Collège universitaire de Saint-Boniface is a university college affiliated with the University of Manitoba and located in Saint Boniface, the French-speaking area of Winnipeg. It is oriented primarily towards the French-speaking community and others who want to learn, or be educated through, the French language and Franco-Manitoban culture. It originated from a school for boys founded in 1818 by Monseigneur Norbert Provencher. It was incorporated into its current form in 1871. The University Of Manitoba was established in 1877 by combining three existing church colleges: St. Boniface Roman Catholic, St John’s Anglican, and Manitoba College Presbyterian.

This was not the original building for the college, their original home being destroyed in a fire in 1922. Formerly this was “Le Petit Séminaire”, the diocesan seminary and was donated to the college by the Archbishop of the time.

The building has a grand classical facade topped with a large drum and dome, painted silver in the French-Canadian manner. The drum and dome is constructed of timber and not stone and copper as would normally be suspected. Not much original architectural detail exists apart from the former chapel. There is a good modern student area by Gaboury Prefontaine Perry.