1875 – Offices for The London School Board, Victoria Embankment, London 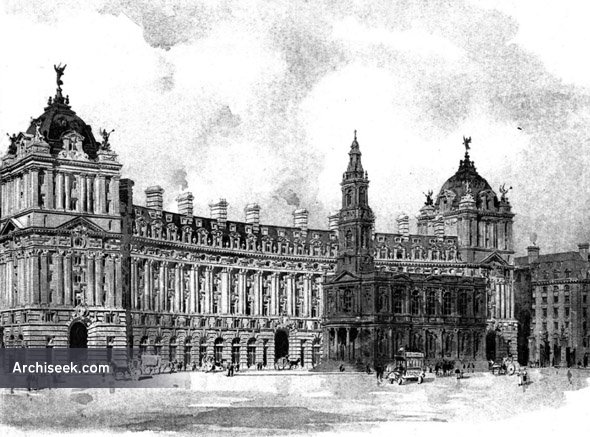 Alexander George Robertson Mackenzie (12 March 1879 – 20 March 1963) was a Scottish architect. At the end of his apprenticeship in 1898, he become his father’s chief assistant. From 1900, to gain London experience, he worked in the office of Colonel Edis (1839–1927), and studied at the Architectural Association and the Central School of Arts and Crafts. He gained further experience working with René Sergent in Paris and in the London office of Niven & Wigglesworth, before returning to his father’s office as a partner in 1902. The London practice was an immediate success, with commissions for the Waldorf Astoria Hotel in Aldwych and a more prestigious one for Canada House (which was cancelled during World War I). Australia House, also in Aldwych, followed a few years later and was built. Perspective view for The Quadrant Site, Strand published in The Building News, September 13th 1907.