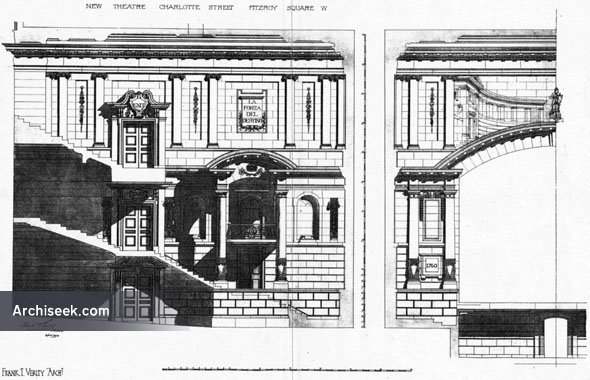 Site of a theatre since 1772, known as The Prince of Wales Theatre between 1865 -1882. In 1903, Dr. Edmund Distin Maddick bought the property, and adjoining properties, and enlarged the site. The main entrance was now situate on Charlotte Street, and the old portico, on Tottenham Street became the stage door. The new theatre, designed by Frank Verity, opened in 1905, as The Scala Theatre, seating 1,139 and boasting a large stage. The new venture was not particularly successful, however, and became a cinema from 1911-1918, before being run as a theatre again. The Scala Theatre, however, was famous because it was the main location for the Beatles’ film A Hard Day’s Night. The Scala Theatre was demolished in 1969 to make way for an office building