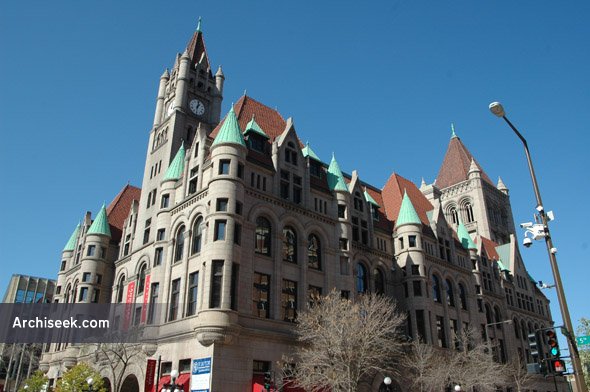 St. Paul’s historic Landmark Center, completed in 1902, originally served as the United States Post Office, Court House, and Custom House for the state of Minnesota. It was designed by Willoughby J. Edbrooke, who served as Supervising Architect of the U.S. Treasury Department in 1891-92. Edbrooke designed a body of public architecture, much of which, like this structure, was completed after his death in 1896.

The exterior is pink granite ashlar with a hipped red tile roof, steeply pitched to shed St. Paul’s snows and enlivened by numerous turrets, gables and dormers with steeply peaked roofs; cylindrical corner towers with conical turrets occupy almost every change of projection. There are two massive towers, one of which houses a clock. The exterior is almost devoid of carved detail. The interior features a five-story courtyard with skylight and rooms with 20-foot ceilings, appointed with marble and carved mahogany and oak finishes. Its Romanesque Revival architecture is similar to Edbrooke’s Old Post Office Building in Washington D.C.

In the 1970s, a group of determined citizens saved the building from the wrecking ball and restored it to its previous grandeur. It was placed on the National Register of Historic Places and reopened to the public as Landmark Center in 1978. It now housing an arts and culture center for St. Paul.