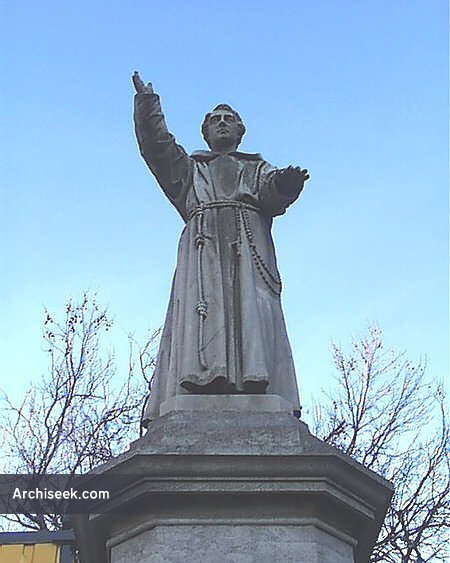 Fr Theobald Mathew (1790-1856) was a Cork-born Capuchin Friar who led a great temperance movement from 1839-1856. His anti-drink campaign is considered to have been a great social revolution that saw the establishment of Temperance Societies in every parish in the country. At its peak between 1838-1845, it was estimated that there were 3-4 million abstaining from drink in Ireland. This high number was aided by the fact that Fr Mathew appealed to every class and rank in society. In 1843, Fr Mathew went to England and Scotland where he had further success, and later spent over two years in the US where he gave the pledge in over 300 towns.

The Irish Builder reported in February 1890 on the competition to select a sculptor – “The committee now decided that Miss Redmond’s design and tender would be the most suitable for adoption. It is only right to add that the great merit of the design submitted by Mr. Herbert Barnes was acknowledged by every member of the committee; but whilst Miss Mary Redmond’s design is no less meritorious, her tender for the completion of the work was eonsiderably less than that of Mr. Herbert Barnes.”