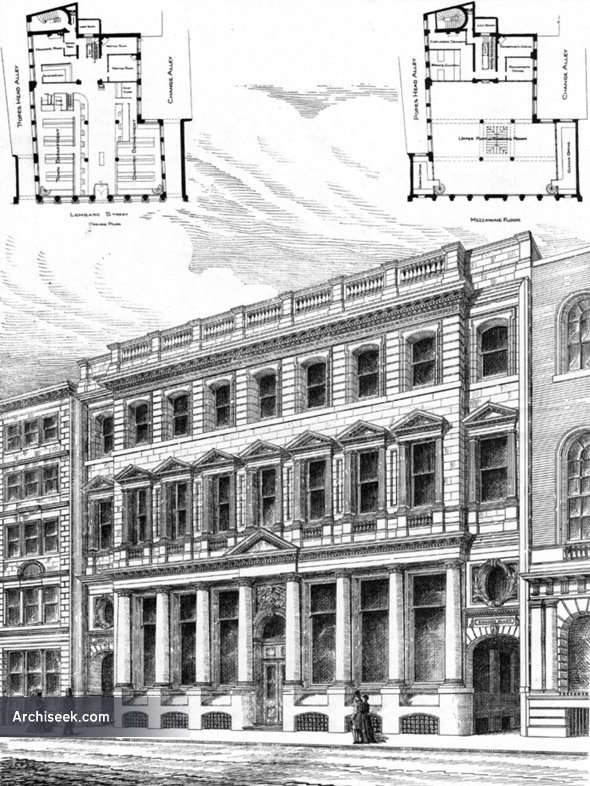 Front elevation and plans published in The Building News, December 23rd 1887. In 1771 a bank called Hanbury, Taylor, Lloyd & Bowman was established at 14 Lombard Street and moved to 60 Lombard Street in 1778 and by 1858 it was known as Hanbury & Lloyd. This bank acted as the London agents of Lloyds in Birmingham. Hanbury & Lloyd merged with Barnett, Hoare & Co. in 1864 to become Barnetts, Hoares, Hanbury & Lloyd. This business was based at 60 & 62 Lombard Street. Lloyds absorbed another bank in 1884 called Bosanquet, Salt & Co. This bank had been created after the amalgamation of two Lombard Street banks – Bosanquet, Whatman, Harman & Bosanquet with Stevenson, Salt & Sons. After all these amalgamations, Lloyds Banking Company became Lloyds, Barnetts and Bosanquets Bank.

In 1887 new premises were completed to house the new bank at 71,72 & 73 Lombard Street. New state of the art developments were incorporated in the design of this building including electric lights, a hydraulic lift and a fire hose and hydrants on every floor. By 1889 the bank had changed its name to Lloyds Bank Ltd. and by 1910 the head office had moved from Birmingham to London.

After the First World War it was decided to rebuild the site of the Lloyds Bank and the new building was completed in 1930. This new building included innovations such as air conditioning and an internal telephone system. 71 Lombard Street remained the head offices for Lloyds Bank until 2003. Now known as 14 Cornhill and a restaurant.