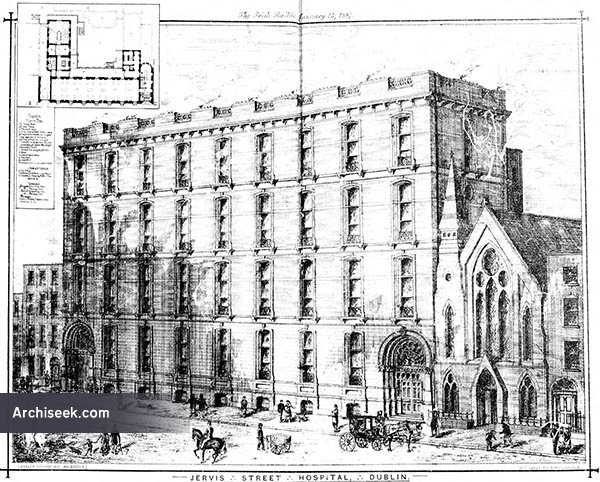 Jervis Street Hospital was a former hospital that became part of Beaumont Hospital, which was completed in 1987. The hospital was founded by six Dublin surgeons as the Charitable Infirmary in Cook St., Dublin, in 1718, at their own expense. In 1786 an agreement was made with the Earl of Charlemont to move into his former mansion at 14 Jervis Street, and the Infirmary moved there in October 1796. In 1854 the nursing and internal management were placed under the control of the Sisters of Mercy. In 1870 a contract signed for building a new hospital at an estimated cost of £29,000 to designs by Charles Geoghegan with work starting in 1880.

The new hospital was completed by 1886 “at a cost of about 55,160. 16s. Id.” The new hospital had a number of notable architectural features which included: wards measuring 132 feet in length, by 30 feet in width and 20 feet in height, affording 2,640 cubic feet of space for each of 36 patients; windows measuring 18 x 5 feet, the sashes being double glazed; glazed corridors; fireproof floors; and a flat fireproof roof with balustrade, forming an exercise ground for the patients.

The site of the hospital became the Jervis Shopping Centre with only external facades remaining.