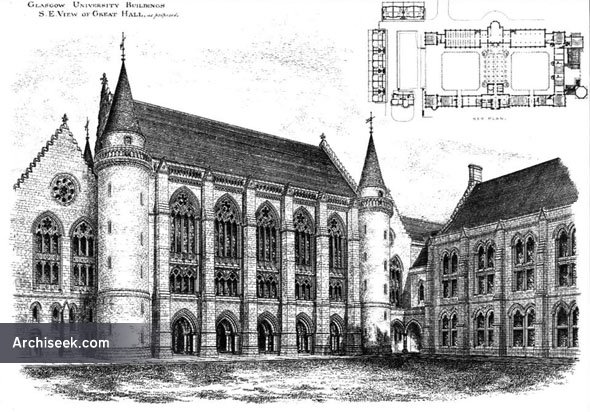 In 1870 a new-build campus was designed by Sir George Gilbert Scott in the Gothic revival style for Glasgow University replacing their traditional location. The largest of these buildings echoed, on a far grander scale, the original High Street campus’s twin-quadrangle layout. Between the two quadrangles Scott’s son, Oldrid, built an open undercroft, above which is his grand Bute Hall (used for examinations and graduation ceremonies), and the buildings’ signature gothic bell tower. The blond sandstone cladding and Gothic design of the building’s exterior belie the modernity of its Victorian construction; Scott’s building is structured upon what was then a cutting-edge riveted iron frame construction, supporting a lightweight wooden-beam roof.

“One of our double -page plates illustrates the interior of the Great Hall of the Glasgow University, of which the late Sir Geo. Gilbert Scott, R.A., was the architect. The view shows the original idea of seating, but in execution this has been modified, and so has the groining on the right-hand side of the picture, a light arcade with detached shafts being introduced in a line with the front of the gallery. The windows remain as here shown. We have received no further particulars, but as we shall illustrate the exterior of this building in a week or two, with a plan of the entire University, we hope then to be able to give some account of the structure, and of those who have built it. “