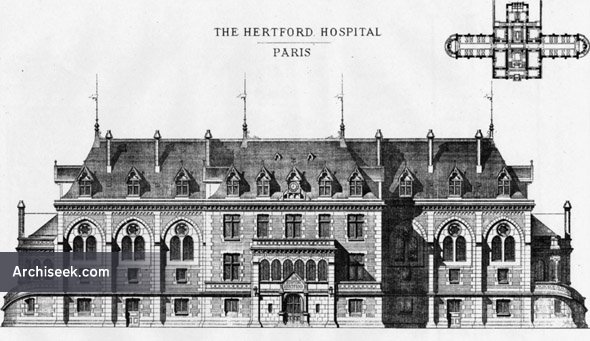 Front Elevation to Rue de Villiers & small ground plan published in The Building News, May 16th 1879. The Hertford British Hospital was founded in 1871 by Sir Richard Wallace for the medical and surgical treatment of “indigent and sick British nationals in and around Paris”. It was named after his father, the 4th Marquess of Hertford. The Hertford British Hospital was opened on its present site in 1879. 130 years later it is still an active charity and has recently merged with the neighbouring Hôpital de Perpetuel Secours to form the Institut Hospitalier Franco-Britannique. This building was constructed by the architect Paul-Ernest Sanson (1836-1918), who is mainly known for building the Château at Chaumont sur Loire. The Hospital was inaugurated in in 1879 by Lord Lyons, the British Ambassador to France. It was originally intended to serve the English community resident in France, but was in due course opened to French patients also. Several years ago, the Trust that ran the hospital attempted to demolish the original buildings, they were only stopped by the French state declaring the building a National Monument.