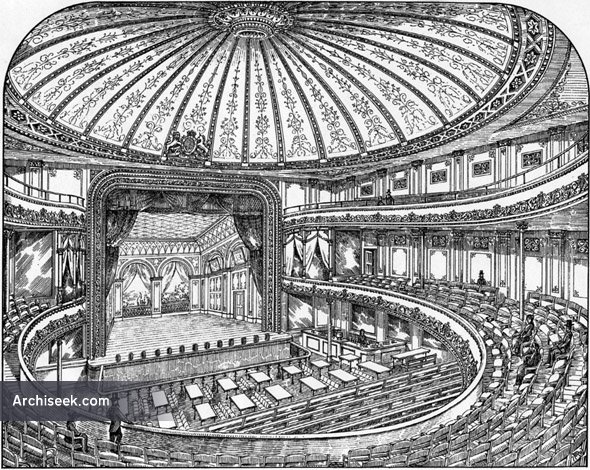 This was the third music-hall to succeed in London, following the Canterbury and Weston’s (Holborn Empire), was burnt down in 1869, but speedily rebuilt.It was badly damaged by enemy action during the Second World War. Drawing published in The Building News, May 13th 1870.

“THE South London Palace, in the London-road, Southwark, has been erected on the site of the old South London Music Hall which was destroyed by tire last summer. The present new building, in addition to the old site, covers considerably more ground, which was obtained by the demolition of some of the surrounding houses. The inside measurement of the new building is as follows : — 120ft. long, 70ft. wide, and nearly 50ft. high.

The stage which is erected at the south side, and is nearly the whole width of the building, has beneath it a space of 20ft. deep to receive and produce scenic effects. The style of the building is Italian. The pit and stalls are on the ground floor, the private boxes and balcony on the second floor ; each of these floors is unusually lofty. The hall is capable of holding 4000 persons. The orchestra, which is 30ft. wide, will hold 40 performers.

The principal entrance to the building is by a wide corridor leading from London-road, at the end of which separate entrances are obtained to the pit, and to the stalls. The balcony floor is approached by a spacious stone staircase, which is also continued to the gallery floor above so as to give additional egress from the gallery in ease of fire. The gallery is approached from London- street by an easy stone staircase, there are no winders in any of the staircases. The pit, stalls, balcony, and gallery are each provided with large and separate refreshment bars. For the accommodation of the officials of the establishment an Iron spiral staircase runs from the pit to the gallery, thus giving an immediate connection to the three principal refreshment bars. The pit, stalls, balcony, and gallery are each provided with lavatories, water-closets, and urinals. There are also private rooms on each floor for ladies. For the facility of the officials there are private stairs from the several floors to the stage.

The auditorium of the hall is covered by a dome 60ft. diameter, which is effectually ventilated by perforated enrichments, and is provided with an elaborate sunlight. In the roof immediately over the dome is a large ventilator ; there are additional ventilators in roof over stage and gallery.

The architect has taken great pains in the general construction of the building. The ventilation, which is unasually good, is obtained (in addition to the perforations in the dome) by series of window openings between the pilasters on each floor (upwards of 70) which openings are filled in on the outside with glazed casements hung on centres with linee, and tilled in on the inside with perforated enriched plaster panels. All the lavatory departments have external ventilation.

One feature in the construction is the novelty of the roof, which is 70ft. span, the portion over the dome being carried by what might be termed collar principals in lieu of the ordinary tie beams, so that by this means an additional height of 9ft. in the dome is obtained in the roof, thereby saves the same height in the walls, by which, considering that additional height would necessitate extra thickness in the brickwork, the saving is very great (see illustration). Considerable trouble has been taken in the levels of the separate floors, which have been so arranged that every person has an uninterrupted view of the whole of the stage, even to the sides of the gallery in which the audience are seated as far as the proscenium.

Unlike most houses, the architect has resorted to the use of a very few columns, which are always objectionable as an obstruction to the view. Although the entertainment of the establishment is that of a music hall, the building is to all intents and purposes a theatre.

The decorations, which are from the architect’s drawings, are principally the grape vine foliage, and are very bold, and have a rich and imposing appearance. The sound throughout is admitted by all to be a great success. The foundation stone was laid last autumn by Stanley Vickers, Esq., M.P., and completed and opened to the public in thirteen weeks, from designs prepared by and under the superintendence and immediate control of Mr. William Paice, architect, Adelphi Chambers ; Messrs. Langmead and Way were the builders.”