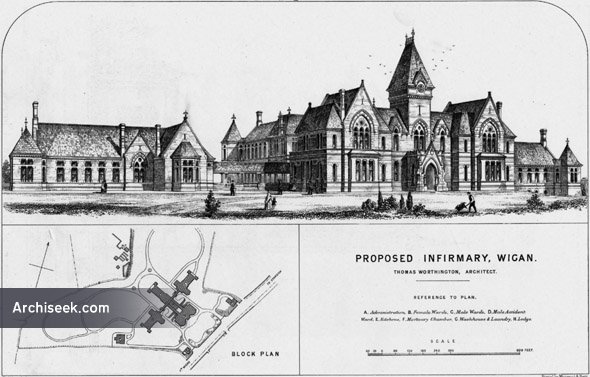 Image published in The Building News, March 4th 1870. “WE this week publish a plan and view of a design by Mr. Thomas Worthington, of Manchester, for the new infirmary at Wigan. The site selected is about half a mile distant from the town, and is well elevated above it. The entrance gates and lodge are at the angle of the land nearest to Wigan. The buildings are arranged so as to front the main road from Wigan. The administrative oftioes and dispensary occupy the centre, right and left of which are wings for males and females ; and iu the re»r of the offices is a two-story pavilion, for surgical or accidental cases.

A porch and vestibule give access to the central hall, on the right of which is a room for the matron or superintendent, in direct communication with the board room. The board has a private lobby leading from the central hall, with cloak room, lavatory and water-closet adjoining ; and a waiting room for patients in attendance on the board, immediately opposite. On the left of the central hall is the group of rooms appropriated to the dispensary department, comprising a patients’ waiting room ; consultiog and retiring rooms for the physician and surgeon ; dispensary; and separate entrance and exit from the grounds for the out-patients. This group of rooms is entirely separated from the other parts of the establishment, so that out-patients would have their entrance and exit without in any way coming into contact with the other inmates of the institution. ‘The physician’s and surgeon’s rooms are each in direct communication with the waiting room. The dispensary adjoins the waiting room, with hatch at which the patients will hand in their presoriptions, and obtain their medicine. In the basement, under the dispensary, is the drug store and lavatory. Adjoining the dispensary is a staircase which oommunicates with the house surgeon’s bed and sitting-rooms with bath-room, water-closet, lavatory, and similar accommodation for the dispenser. A similar staircase, on the opposite side of the central hall, communicates with the matron’s private apartments, and with six bed-rooms for nurses and domestic servants, and a general [store for linen, &e. A large cistern in the tower will provide for the general service of the establishment, and will afford an ample supply in case of fire.

The most central position has been selected for the kitchen and domestic offices, which adjoin the ward corridor, with serving counters on the male and female sides respectively. Glazed corridors on each side of the kitchen communicate with the central hall of the administrative buildings. The scullery and cook’s pantry are on the same level with the kitchen. The larder and stores for kitchen use, with the beer and wine cellar, are in the basement under this part of the buildings, and are approached by staircases from the kitchen and from the central hall. The central court is at the same level as the basement floor, and has cart entrances with a sub-way under the glazed corridor, for the delivering of stores.

The ward accommodation provided is for 60 patients, 45 males and 15 females. Behind the kitchen is the male ward of 30 beds for surgical cases or accidents, having two small sirgle-bedded wards for special treatment, or isolation after operation. This pavilion contains two stories of wards, of 14 beds each— Length of ward 68ft, width 26ft. height 14 ft, = 108 superficial feet of floor surface, and 1507 cubic feet to each bed. The single-bedded wards are 12ft x 12ft. Gin. X 14ft. high, and contain each 210O cubic feet. The levels of the ground have suggested, with a view to economy, that the ground- floor ward should be about 4ft. Gin. below the corridor level, which has the advantage of reducing the number of steps required to the upper floor. Immediately adjoining the staircase is the operating room, and the lift for raising patients to the upper floor. The nurses’ room is placed between the large and small ward on each floor, with inspection windows to each ward. Ample water closets, bath and lavatory accommodation is provided in connection with these wards and the operating room. A window is placed between each bed, of tripartite construction, with swivel sashes and open hoppers close to the ceiling. Provision will also be made for admission of air near the floor, between each alternate bed.

The side pavilions, for 15 beds each, forming the two wings, are only one story high, and each contains a ward of 10 beds — length of ward 42ft. — width 24ft. — height 14ft. ; and a smaller ward of 5 beds, length 29ft.— width 20ft. These dimensions afford 1000 superficial feet of floor space, and 1411 cubic feet to each bed in the larger wards, and 1624 cubic feet in the smaller ones. (Each of these pavilions has a spacious and airy day-room, with large projecting bay window overlooking the front part of the grounds and the high road. A nurse’s room and scullery are placed between jthe wards and the day-room, with windows for supervision. The water closet will, in all cases, be cut off by ventilated passages. The positions of the fire-places generally, though in some respects different to the arrangement generally adopted in pavilion hospitals, have been practically tested with good effect. ‘The greatest attention has been paid to warming, ventilation, &c.

The plan comprises detached mortuary chamber, with the separate wash-house and laundry, and has been arranged with a view to a future extension of 50 per cent, which may be obtained in a most economical manner by raising the two side pavilions an additional story, adding the required 30 beds. “