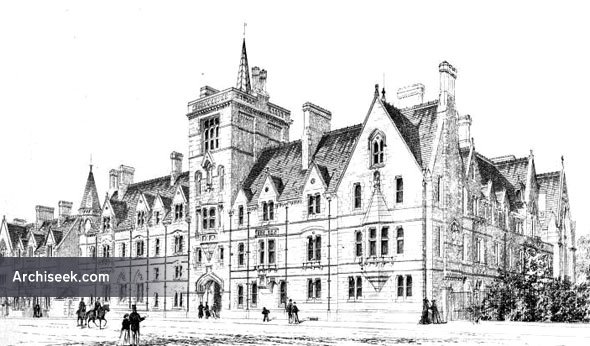 Description published in The Architect and Contract Reporter, January 2 1869, written by the architect Alfred Waterhouse.

[Mr. Editor,””You have requested me to give you a short description of the work at Balliol, and to put my name to it. I do so with pleasure, believing it best that a description of this nature should be avowedly that of the architect himself, when it cannot be from the pen of nn independent and unbiassed critic.]

The project of rebuilding a considerable portion of this ancient and historically interesting College hod been for many years in contemplation. Two designs hod been prepared for the purpose, and, at a later period, Mr. A.W. Pugin filled a portfolio with beautiful studies for the same object, but was not enabled to carry any of his ideas into execution.

The munificence of a lady, Miss Brakenbury (the lineal descendant of John de Balliol, the founder of the College), who offered to rebuild that portion of the quadrangle facing Broad Street at her own expense, caused the work to be commenced in earnest, and the writer was requested by the College, in the early part of 1866, to prepare a new design embodying its present requirements. This being done, tenders were obtained, and that of Mr. William Brass, of London, amounting to about 20,(KXW., accepted. The work of demolition began at the commencement of Easter Term last year, and the whole of the new buildings are now so far completed that, while the Master, the Rev. Dr. Scott, has been in possession of his house for some weeks past, the College-rooms will be in full occupation during the ensuing term.

The work consisted in the rebuilding of the south and east sides of the quadrangle, facing Broad Street and the fore court of Trinity College respectively, as well as of the Master’s House, which looks into Broad Street on the south and into the College garden on the north, and is separated from the new College buildings proper by a small courtyard.

The old work which had to make way for the new was of little or no interest architecturally; its original character had been irretrievably destroyed by tasteless modifications during the lost century, and the crumbling local stone of which it was put together mad’e nny attempt at restoration impossible; besides which, it was deemed of some importance to rectify an extremely crooked street line.

While thus two sides of the quadrangle are entirely new, the other two sides remain untouched, being all early work, with some slight exception in the way of restoration, and with the important exception of Mr. Butterfield’s Chapel in the north-cast corner. In the opposite, the south-west corner, the Oriel window of tho dining-room in the Master’s house has been, of course,,religiously preserved; indeed, a feeling of the absolute necessity for its preservation has dictated the arrangement of much of the present plan, as, had it not been for the position of this Oriel, the hall would nave been extended towards the south, and an urgent want thus adequately met.

The block-plan shows the general arrangement of the new buildings and their connection with those portions of the old which lace the quadrangle on the one side and the garden on tho other. The garden is shut in bv the hall, the new residence of the Master, a long range of rooms built by Basevi, and a gateway and other buildings adjoining by Salvin; while, on the other side, the line of buildings forced by Mr. Salvin’s picturesque kitchen and buttery, and tho north fronts of the library and chapel, shut out the new buildings surrounding the quadrangle from view, except the summit of tho new tower which rises above them.

The perspective view shows tho Broad Street front of the new buildings, which are built entirely of Bath stone and covered with Broseley tiles.

Further particulars will be given in a future number.