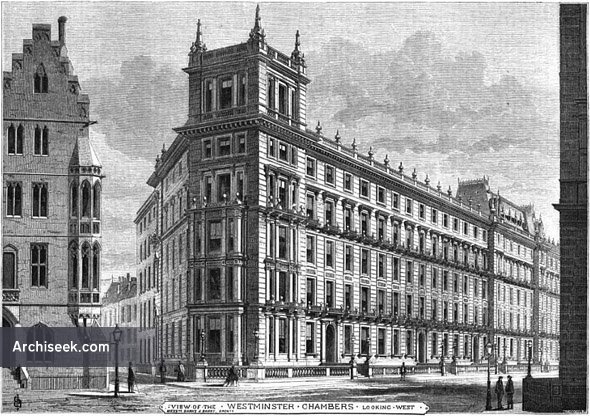 “Among the numerous buildings of magnitude which are everywhere rising into notice in London is the structure called the Westminster Chambers, at the south-east corner of Victoria Street. We give a ground-plan, and a view of it as seen from the Broad Sanctuary, near Westminster Hospital. It occupies the frontage to Victoria-street, immediately opposite the Westminster Palace Hotel, and with it will form a striking entrance to this great street, and redeem it from the waste and desolate character which it has presented for so many years. Already a strong impetus has been given to building along its frontages by the formation of the Victoria Station, connected as that station is with the system of four of the great railway companies.

The Westminster Chambers have a frontage to Victoria-street of 450 feet (or about half the length of the new Houses of Parliament), and extend back to Orchard-street, now about to be widened and improved by the Westminster Improvement Commissioners: the building also fronts on Dean-street; and the site thus having thoroughfares on nearly all sides, and being above two acres in extent, affords facilities for light and air to the offices and residential chambers which the building is to contain.

The demand for offices for Parliamentary solicitors, agents, professional men, and others engaged in or connected with the business of Parliament and the Courts of Law at Westminster, has of lite years been far beyond the limited accommodation that could be found in existing houses; and rents have been increasing in Westminster for such accommodation to a great extent, while the nature of the accommodation has been very inconvenient from the unsuitability of rooms originally intended for domestic accommodation being applied to the purposes of professional offices. In addition to this, the improvements and clearances which have occurred, and are likely to continue to occur for some years, in Westminster, in connexion with the Westminster Bridge approaches, Thames Embankment, new Government Offices, &c, have reduced the already scanty office accommodation still further.

To remedy this state of things an association was formed under the Joint Stock Companies Act, with limited liability, with the name of “The Mutual Tontine Association,” one of the objects of which was to introduce the tontine principle in connexion with a solid investment, by the purchase of the freehold of the ground in question, and the erection thereon of a substantial building, handsomely, but not extravagantly treated architecturally, and arranged with care, so as to give the most convenient office accommodation, with separate access to each suite of offices, good light and ventilation, fireproof staircases and passages, lifts, washing-closets, and w.cs. to every set of chambers; while, at the same time, the plans were to be so arranged as to readily permit one, two, or more suites, or even the whole building, to be thrown together and made one; and it was felt that no more certain or safe investment could easily be obtained, and that a high rate of interest might be anticipated.

The shareholders have the option of subscribing to the undertaking in the way of ordinary shares bearing a dividend in proportion to the net profits in the usual way, or on the tontine principle, by which subscribers of similar, or nearly similar age, are arranged in classes, and a rateable proportion of the net profits is allotted to each class. As any of the class die nil’, the income of the survivors, therefore, steadily increases; and it has been arranged that when any class is reduced to one tenth of its original numbers, the property belonging to that class is to be then absolutely divided among and vested in such remaining onetenth.

The building, which is now rapidly rising, will contain about 530 rooms, disposed on the basement, ground, first, second, third, and fourth floors. It will consist of two parallel ranges of building, each about 430 feet in length, and 39 feet in depth, separated by court-yards about 50 feet by 22 feet, access to the whole being obtained by seven stone staircases of easy gradients and from seven arched entrances from Victoria-street. Each suite of rooms will be approached from a separate entrance-door on the landings of these staircases, and will consist (as the enlarged plan shows) of four or five rooms, as the case may be, with a few sets of two rooms each. There are 120 of these suites in the entire building. Party walls separate the building into fourteen compartments ; making, as it were, fourteen separate self contained houses; and thus, in case of fire, limiting the damage to the division or compartment in which it might occur, and diminishing thereby the expenses of insurance.

The contract for the entire works has been taken by the well-known contractors, Messrs. Lucas, Brothers, for 130,000/.; while the purchase of the freehold, Parliamentary and other necessary expenses, will probably require a total sum of about 200,000/. Four-fifths of this have been already subscribed. It is expected that the remainder will be taken up before the building is opened.

The scale of rents of the chambers is said to be only slightly higher than those now paid in Westminster for very inferior accommodation, and about 25 per cent, lower than those obtained in Gresbam House, City, which is, to some extent, a similar sort ot building. Already numerous applications for chambers are being made to the directors.

Messrs. Lucas undertake to complete and deliver over the building to the directors by or beforo Michaelmas, 1864. The architects to the Association are Messrs. Banks & Barry, of Sackville-street.” From The Builder, July 11 1863.