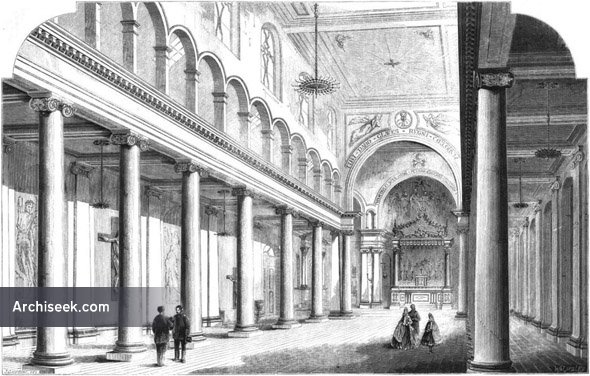 The first portion of this building has been erected from the designs of Mr. John Miller Bryson, architect, to accommodate 2,000 persons; but when the proposed extensions are carried out, it will be capable of holding 3,400. The walls are of grey stock bricks, tied together with iron hoop bonding at intervals of every 6 feet in height, laid in cement ail round the building. The columns that support the triforium and clerestory are of hard York stone, and of the Ionic order. The piers of the triforium aro of similar stone, with merely plain caps: eventually the caps will be of the composite order. There are two side aisles, a nave, chancel, and apse. The edifico is in the Roman basilica style, the only church of the same style in the kingdom. Statues of the four Evangelists are in niches, two at each side of the chancel. There are two galleries in the church, one on either side over the Bide aisles (as triforia), to which access is obtained by means of stone stairs. At each side of the high altar there will be the means of communication with the sacristy, but this portion has been suspended from want of sufficient funds. Under the chancel there is a subterranean church or crypt, which was opened on the 25th December of last year. The crypt is entered from Bac-hill, and is capable of holding 200 people.

When all the works at present contemplated are executed, there will be a priest’s house in Backhill, part of which is now erected, and schools in Ocorge-yard, where from 400 to 500 boys and girls will be educated. There will also be a hall of debate for the temperance society. When the church is completed there will be fire entrances, viz., three in Little Saffron-hill, on the site where five houses now stand; and in that direction east the church will be extended, having a cut stone front and portico.

The ceilings are flat, in a series of panels, which will eventually be painted, as also will be the walls. There will be a tower at the south-west end of the church (part of which is now built), carried up to a height of 100 feet, where will be hung a bell (weighing four tons) that was purchased of Messrs. Vickers & Co., of Sheffield, and shown at the International Exhibition last year.

The high altar has four polished black and gold marble columns, standing on pedestals, with white marble caps and bases of the composite order, surmounted with a cornice wreath, crown canopy, and cross, which will be gilt. The tabernacle and steps of the high altar are of different coloured marbles, all of which have been obtained from Italy.

The church at present is 138 feet long and 70 feet wide: the height from floor to ceiling is
56 feet. The side aisles are 88 feet by 17 feet, and 20 feet high. The triform are 88 feet long and 10 feet wide, having small rooms at the sides for keeping the valuables connected with the church. The body of the church is lighted by clerestory windows, in each of which is a design in the shape of a cross, made of iron and wood. The chancel is lighted by windows of a similar design and make.

The amount expended up to the present time, including the portions executed by contract, and those portions carried out on day time, as well u the amount paid for the site, is about 15,000f., which has been collected abroad by the priest* connected with the church. It would probably be unfair to criticise the building in its present unfinished condition.