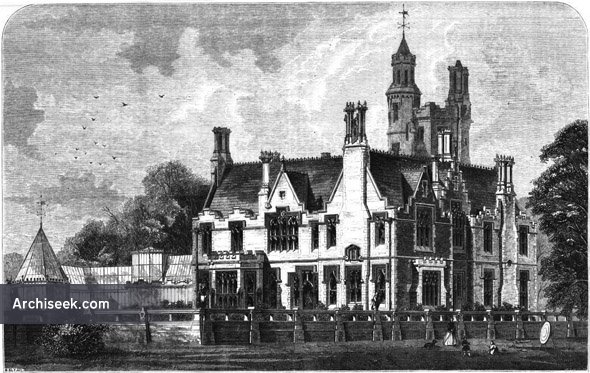 “This mansion was erected some time ago for Mr. John Croasley, at Manor Heath, about a mile from the town of Halifax, Yorkshire, from the designs and under the superintendence of Mr. Alfred Smith, of the Adelphi (one of the architects of the Army and Navy Club House in Pall Mall). Mr. Smith’s designs were originally chosen by Mr. Crossley from the competition drawings (all in the Italian style) of six selected architects, all of whom received a moderate premium for their trouble: afterwards, at Mr. Crossley’s request, the chosen architect prepared the design in the Gothic style, which we have engraved.

The whole of the external walls are built with ** Stainland” or ” Park Spring” Stone quoins, dressings, etc, filled in with self-faced, narrow York bindings. These walls are battened internally, and the other walls are of brick. The carcass was built by local tradesmen, and Mr. Thomas Risley (a provincial architect) rendered valuable assistance as clerk of works. The windows arc all on the sash principle, with the division of the upper and lower sashes immediately behind the stone transoms. The rooms were all fitted up and furnished under the direction of the architect. The ornamental portions of the ceilings, &c., were executed in Carton-pierre by Jackson & Sons, of Rathbone-place; and Messrs. Jackson & Graham, of Oxford-street, supplied the furniture and hangings.” As published in The Builder, March 21, 1863.