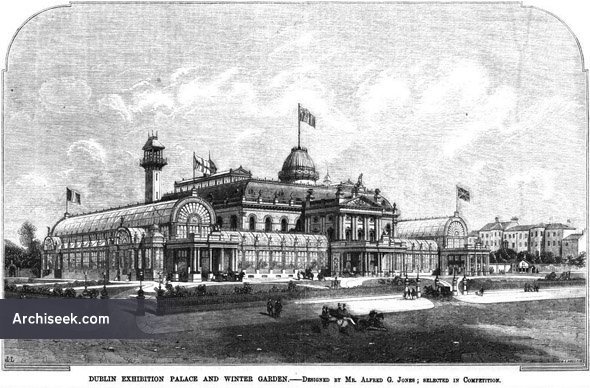 “The committee, as our readers are aware, selected from the designs for this work submitted in competition, one by Mr. Alfred G. Jones, of Dublin. We have engraved a view of it. The principal front is intended to face Earlsfort Terrace, and contains three separate entrances, the one in the centre leading to the grand entrance hall, which is to be lighted by a dome, forming an important feature. From this will be corridors communicating with the concert halls, winter garden, and exhibition buildings. There are also two special entrances””that on the north side leading to the Exhibition department, and that on the south to the winter garden. A colonnade connects these three principal entrances,and affords shelter and accommodation for a large number of carriages to set down and take up their occupants without the risk of exposure to the weather.

On the left hand of tho central entrance is placed the concert-hall, capable of accommodating 3,000 persons, with an orchestra and retiring and dressing rooms. There are separate cloakrooms provided for the convenience of the audience both in the body of the hall and in the galleries. On the right of the entrance-hall is placed the small concerthall, capable of containing 1,500 persona. It is to be provided with similar arrangements, and also a lecture-room and practising-rooin. 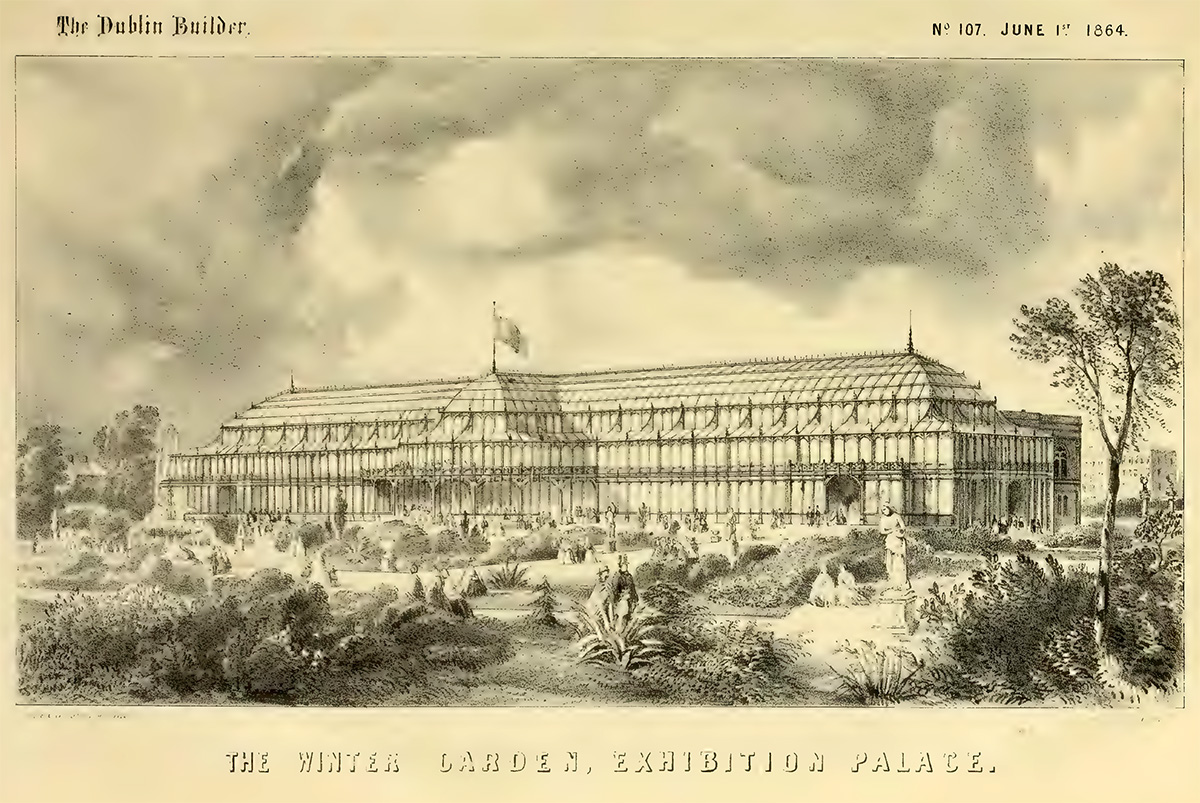 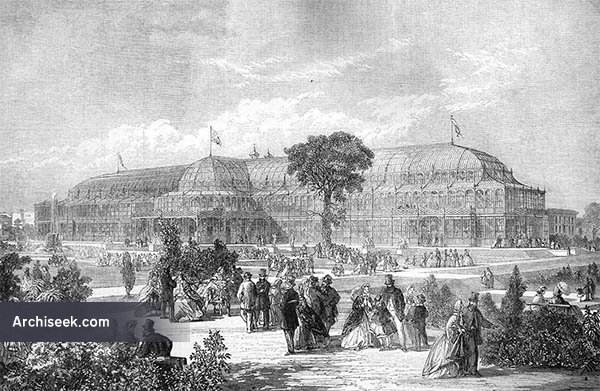 The Exhibition building is placed on the north side, and extends from front to rear, provided with picture galleries.

The Winter Garden will be formed at the south and west sides, and will be of considerable extent, with continuous galleries. This; building is to be constructed of glass and iron, having two principal fronts. Tho west front of the Winter Garden will run the full extent of the buildings, and unite with the Exhibition department. The building will also contain a private entrance for the use of the Lord Lieutenant and his suite, as well as dining – rooms, boardroom, secretary’s office, manager’s residence, Ac, with a basement story. The building, except on the north Bide, will be surrounded by an ornamental garden and grounds, the laying out of which will be under the direction of Mr. Nevln, landscape gardener, of Drumcondra. The cost of the building is estimated at 40,0002. The whole site covers about 15 acres of ground. 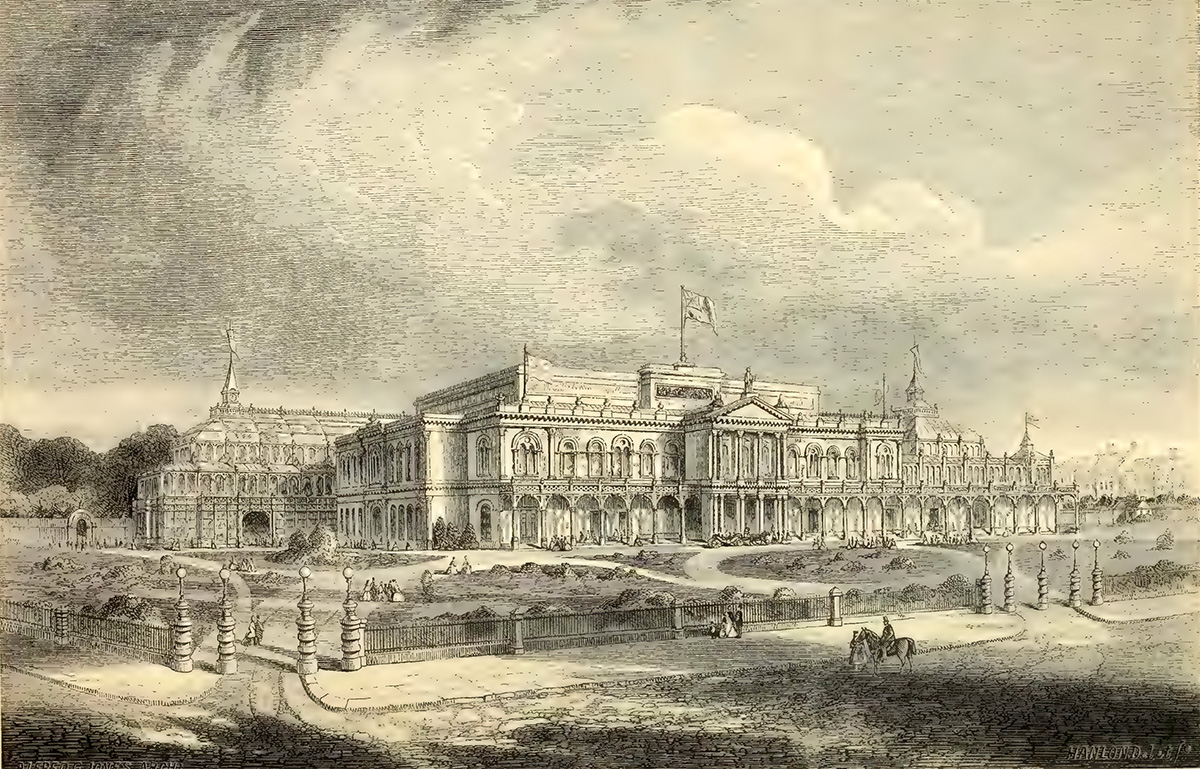 The architect, Mr. Jones, has engaged the co-operation of Messrs Ordish & Le Feuvre, of London, to assist him with the details of the ironwork. The illustration represents the design (is selected by the committee j but certain modifications will be made, chiefly with a view to reduce the cost.” As published in The Builder, January 31, 1863.

“Our illustration represents a view of the Winter Garden portion of the Dublin Exhibition Palace (now in course of erection) as seen from the ornamental grounds at the rere of Harcourt-street. This building consists of a nave 477 ft. long and 50 ft. wide, with aisles on either side 16 ft. 10 in. wide, over which are galleries continued all round the building. There are three entrances at the south end and one at the north, while in the circular transept are several doors opening into a colonnade, over which is an external gallery, forming a most desirable feature, and commanding an extensive view of the pleasure grounds. Some progress has been made with the erection of this portion of the works, and also with those of the exhibition department situate on the north side of the main building. These works are being rapidly proceeded with, and will in a short time present some idea of their magnitude and beauty. The contractors are Messrs. Beardwood and Son, who are carrying out the works, under the superintendence of Mr. Alfred G. Jones, Architect.” The Dublin Builder, June 1 1864.