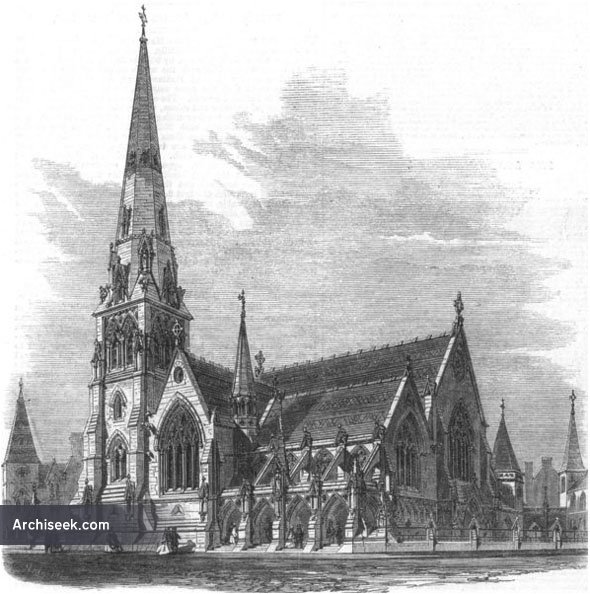 Originally constructed as St Andrews Church of Ireland and built on the site of an earlier church destroyed by fire. After deconsecration, it was converted into commercial space and for many years was used as a Tourism Office. It is currently empty and awaiting new uses. The interior is much changed but still retains the height and airiness of the original nave of the church. The exterior has a fine vaulted arcade with ornate stonework and pinnacles.

From The Building News: “The foundation stone of a new church of St. Andrew, Dublin, was laid on Monday. The cost of the building is estimated at £12,735. Messrs. Lanyon, Lynn, & Lanyon, of Belfast, supplied the plans. The design is in the Gothic style of architecture, and when the building is completed it will hold 1,000 people. It is intended to build at first only a portion of the design — that is, only sufficient to enable divine service to be celebrated. This will cost £7,230. The remainder of the building, including the upper part of the tower, the cloisters, porch, north aisle, external and internal ornamentation, will afterwards be completed, and the committee will require £5,505 for this purpose.”

The Dublin Builder described the original interior at length: “Entering the church through the western door, the effect of spaciousness which impresses one is of a highly pleasing character. The nave is four bays in length, having molded arches, stone columns, carved capitals, &c. ; it is about 30 feet in width, and reaches the altitude of 72 feet to the ridge of roof. It is roofed with an open timbered hammer-beam roof boarded on under edges of rafters. All the roofs have been stained of a dark color, contrasting well with the light tint of the walls. The stain used throughout is Swinburn’s.

There is a lofty clerestory, well lighted by two-light windows, one to each bay. The space between each window is relieved by a small column carrying the feet of principals and resting on corbels at the level of the molded string beneath the windows. The nave arches are well proportioned, having the angles cut off by a broad muscular double chamfer, which accords not well with the more delicately treated hood moulds over. The carving to capitals of nave columns (by Mr. Harrison) is very fair, but wanting in sprightliness and vitality ; and as for the base mould to columns, we consider it the worst bit of detail in the entire building.

The disposition of the numerous arches about the intersection of transept with nave and aisles, the arch at either side of chancel ditto opening from transepts respectively to the organ chamber and robing-room, and again from these places to that portion of chancel appropriated to the choir fitted up to half their height with well designed and executed screens, impart an air of extreme lightness and grace to this portion of the building.

The chancel steps are brought out beyond the line of chancel arch some feet, blocks being raised at either extremity of them for the pulpit and reading-desk, which, hy the way, are excellent specimens of Gothic carpentry, both as to design and workmanship. ‘J’he chancel itself is terminated in a semi-octagonal apse with a waggon-headed ceiling, having curved principals (with herring-bone sheeting between them) resting on corbels whereon are carved figures of angels bearing scrolls, &c.

The walls of chancel are decorated as high as string under windows in a simple, chaste, and effective manner—two tints only being used, and a marginal pattern in black and white. On the string itself a suitable inscription has been painted in letters of black and red. There is a quietness of tone about this painted decoration very commendable in a building like the one under consideration, which is conspicuous for its absence of colored material. The chancel floor is raised three steps above level of nave, and the sanctuary, or that portion within the communion rails, is two steps higher—all laid with encaustic tiling in well-arranged patterns.

The entire available space of the church has been fitted up with seats intended, we understand, to accommodate between 700 and 800, and in short, all the arrangements for the accommodation and comfort of the congregation are of a character to leave nothing tombe desired.

We must not omit to notice the carving by Messrs. Earley and Powells, of Camden-street, who are so well known for the superiority of their decorative work of every kind ; nor to mention that the decoration on the walls of chancel is also due to them. An elaborate crocketed mural tablet recording the names of donors to the erection of the north aisle, and adjacent cloister porch has been executed by them, and fixed in the west wall of the north aisle. While making our hurried inspection we had the pleasure of seeing two artists from their establishment, engaged on the carvings at the western doorway, and we could not fail to be very favorably impressed with their handling of the subjects, one of which, a life-sized head of St. Andrew, deserves special commendation, betokening considerable artistic power on the part of its executant. ‘I’o notice the work of men who evidently possess a thorough knowledge of, and love for their profession, affords us very sincere pleasure. The gates and railing for enclosing the building are also from the workshops of Earley and Powells, and although they have not been fixed in their positions, we have seen them, and can say truly that they are of superior workmanship and design.

The name of Skidmore (Coventry) is a sufficient guarantee for excellence of work in his special department, and on this occasion we need do no more than say that the gasaliers and standards supplied to St. Andrew’s fully sustain his reputation.” The Dublin Builder, December 1 1866.