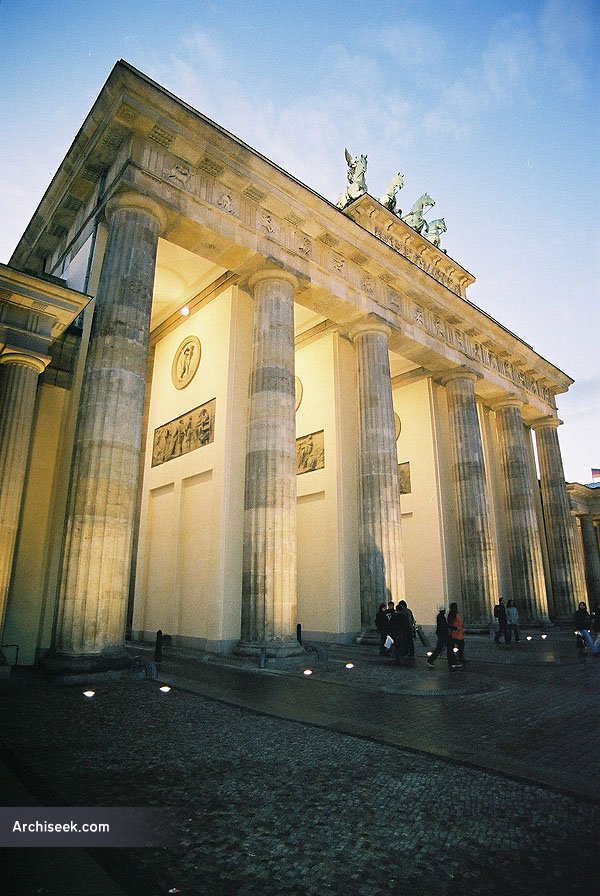 The most celebrated image of Berlin is the Brandenburg Gate which was isolated during partition, as it was sited in no-man’s land between the east and west. The gate has a troubled history, being mutilated and damaged by regieme change and wars. When originally built the gate ended Unter Linder, the leafy avenue from the Royal Palace and the Tiergarten. It was modelled on the Propylaeum on the Acropolis in Athens and the entablature motifs inpired by the Parthenon. The bronze statue with Eirene, goddess of Victory was not completed until 1793 and was designed by Gottfried Schadow. The statuary was moved to Paris by Napolean after he captured the city in 1806. It was later returned and Schinkel added the staff with the Prussian eagle. By 1945, the gate was in poor repair and the bronze figures destroyed. The East German regieme wanted to restore the gate but replace the bronze statuary with a sculpture of a socialist family facing the sun. Fortunetly sanity prevailed and the original figures were replaced. Since reunification, the gate has been restored to all its glory.