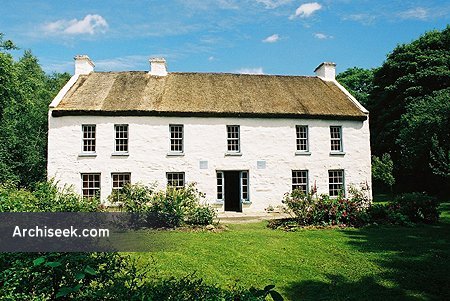 Aghalane House or more commonly known at the Campbell House was built by by Hugh Campbell in 1786 near Plumbridge, County Tyrone. Above the doorway he placed two stone plaques, one bearing his name and date of construction and the other bearing the arms of the Dukes of Argyle. Two of the family later emigrated to the United States and had great success as businessmen and politicians.

This fine house was built in several stages as the family fortunes improved. Unlike many houses of its time, it had separate kitchen and living rooms as well as decorative features such as the sidelights on the front door.

This building is now at the Ulster-American Folk Park in Co. Tyrone The centrepiece of the park is the Mellon Homestead which is still on its original site. The other buildings are useful as representative works of vernacular Ulster architecture.