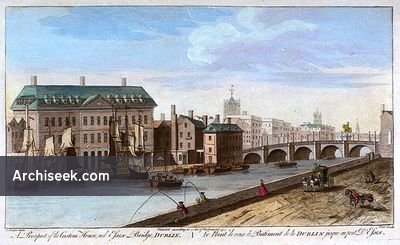 The son of a Bishop, Thomas Burgh (1670-1730) joined the army like many from a landed background. His first recorded building is the enormous Royal Barracks now Collins Barracks begun in 1701. This is the earliest public building existing in Dublin with the exception of the Royal Hospital at Kilmainham and it was built on the site that a hopeful City Corporation had earmarked for a mansion for the Duke of Ormond. He was also responsible for the Custom House (1707) which was replaced by Gandon’s masterpiece in 1791. The old Custom House was a two storey building with a mansarded roof and was used as a barracks for a time until it was demolished.

He was also responsible for Dr Steevan’s Hospital, the Library at Trinity College, St Werburgh’s Church (1715) although the façade may be by Alessandro Galilei who was working on Castletown House at this time for Speaker Connolly. He was appointed Surveyor General in 1700, and held the position until his death in 1730. The greatest disappointment of his career must be that he was passed over for the commission of the new Parliament building that went to Pearce. As Surveyor General he would expected this commission but Pearce was the young rising star of the period and Burgh was ill.