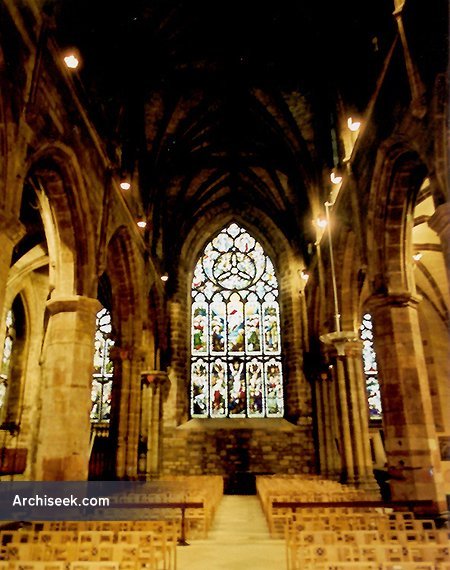 St Giles’ Cathedral, the High Kirk of Edinburgh, with its distinctive open crown steeple supported by eight flying buttresses mainly dates from the fifteenth century. Between 1829 and 1833 the building was “modernised” with a new skin of masonry (apart from the “crown” tower which was built around 1500) which explains the proliferation of stone carvings on the cathedral’s exterior.

The interior has a more rugged appearance, and includes the beautiful Thistle Chapel (1911) by Sir Robert Lorimer (who also designed the Scottish National War Memorial), noted for its ornate wood carving. This is the chapel of the Order of the Thistle, which is one of the oldest orders of chivalry in Europe.

St Giles’ also contains memorials to a number of famous Scots, including the Marquess of Montrose (1612-50) who was hanged at the Mercat Cross a few yards away; and his bitter political rival, the 8th Duke of Argyll (1598-1661), beheaded on the same spot. Also commemorated is a more pacific character, the Edinburgh born author Robert Louis Stevenson (1850-94).