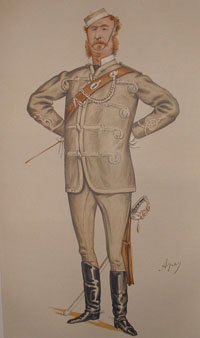 Colonel Sir Robert William Edis was born at Huntingdon, Cambridgeshire on 13 June 1839. He was educated at Aldenham School and articled to William Gilbee Habershon and Edward Habershon whereafter he became head assistant to Anthony Salvin. In 1859 he joined the Architectural Association (of which he was to become president 1865-67) and in 1880 the Artists’ Volunteer Rifle Club (of which he was to become Colonel 1883-1902). He was admitted ARIBA on 17 November 1862, his proposers being H B Garling, William Burges and John Pollard Seddon, and commenced practice in the following year. He was admitted FRIBA on 29 April 1867, his proposers being Edward William Godwin, James Fergusson and Frederick Pepys Cockerell.

In his RIBA obituary Edis is described as having spent much of his professional career in building and altering private houses in England and Scotland. His early work was Gothic but with Godwin he moved quickly into Queen Anne and the Aesthetic Movement, publishing ‘Decoration and Furniture of Town Houses’ (1881) and ‘Healthy Furniture and Decoration’ (1884). He was knighted for his military services in 1919 and died at The Old Hall, Great Ormsby, Norfolk on 13 June 1927. His wife had predeceased him but he was survived by his five daughters.