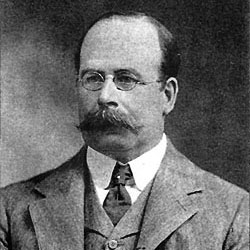 Edward Guy Dawber was born at King’s Lynn in 1861, the son of a merchant there. He was articled to William Adams in the same town about 1877 and then moved to Dublin as assistant to Sir Thomas Newenham Deane, but in 1882 the Land League riots brought all building work to a close and he had to return to England.

The quality of his draughtsmanship secured him a place in the office of Ernest George and admission to the Royal Academy Schools, but in 1877 trouble with his eyesight resulted in him being sent as clerk of works to Batsford Park, then building for the diplomat and politician, Algernon Bertram Freeman Mitford, later (1902) Lord Redesdale. This enabled him to study the vernacular architecture of the Cotswolds, sometimes in the company of Herbert Baker who was then George & Peto’s chief assistant. He passed the qualifying exam in 1889 and was admitted ARIBA on 3 June 1889 his proposers being George, Sir William Emerson and John Belcher. With the support of Freeman Mitford, Dawber commenced independent practice at Bourton-on-the-Hill in 1890, returning to London to rent an office at 22 Buckingham Street, Strand, where he became an active member of the Art Work’s Guild.

Within a decade Dawber built up a large practice specialising in middle-sized stone-built country houses in a refined slightly understated idiom which varied in style from Tudor to late Stuart. He designed only two major urban buildings, the London and Lancashire Fire Office in Pall Mall, London (1906) and the low-profiled Foord Almshouses at Rochester (1926). His largest commission was the extensive Lord Wandsworth Agricultural College, Long Sutton, Hampshire (1915 onwards) where he replaced Reginald Blomfield.

With David 27th Earl of Crawford and 10th of Balcarres Dawber founded in 1925 the Council for the Preservation of Rural England of which he was vice-president and chairman; in his earlier years he had written extensively on vernacular buildings, particularly those of the Cotswolds and Kent and Sussex. He then had a fairly high profile as President of the RIBA, an office he held from 1925 until 1927, the year in which he was belatedly elected ARA. In 1928 he was awarded the Royal Gold Medal, the first architects with an exclusively domestic practice to be so honoured: elevation to full academician followed in 1935, and a knighthood in 1936.

Dawber died in London on 24 April 1938. he was survived by his wife Mary Eccles, sister of the architect Thomas Edward Eccles.