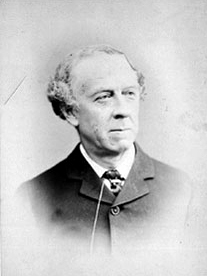 Arthur William Blomfield was born on 6 March 1829 at Fulham Palace in London the fourth son of Charles James Blomfield, Bishop of London 1828-1857. He was educated at Rugby School and Trinity College Cambridge from which he graduated BA in 1851 and MA in 1854. In 1852 he was articled to Philip Charles Hardwick and about this time he travelled on the continent with Frederick Pepys Cockerell. In 1856 he commenced independent practice was notably successful as a church architect, in large part due to his father having established a diocesan fund for new churches. He was president of the Architectural Association in 1861 and was elected FRIBA on 20 May 1867, his proposers being George Gilbert Scott, H Brandon and John Pollard Seddon.

Blomfield was appointed architect to the Bank of England in 1883. He also held the post of architect to the Diocese of Winchester. He was elected vice president of the RIBA in 1886, was knighted in 1889 and was awarded the RIBA Gold Medal in 1891. His sons, Charles James Blomfield and Arthur Conran Blomfield were assumed into partnership in 1890 and after 1901 respectively.