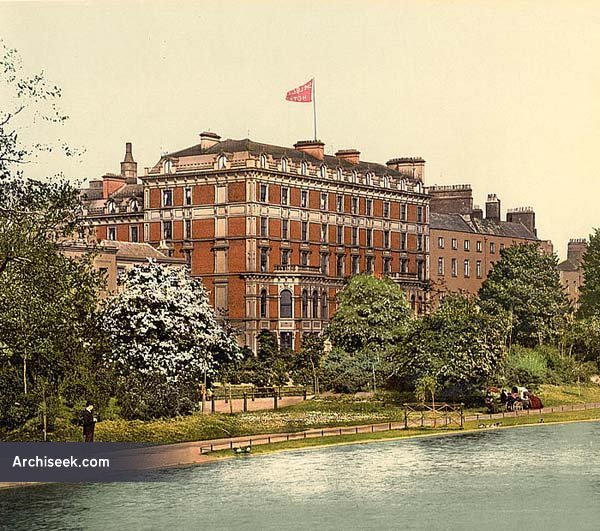 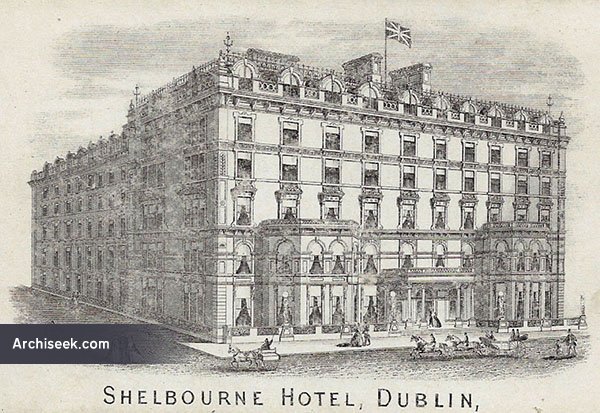 Stands on the site of Shelbourne House, the Shelbourne Hotel was established in 1824 by a Tipperary man, Martin Burke, whose ambition was to open a hotel in Dublin that would ‘woo genteel custom who wanted solid, comfortable and serviceable accommodation at a fashionable address’. To achieve this, he leased three houses – numbers 27, 28 and 29 St. Stephen’s Green. Burke named his grand new hotel The Shelbourne, after William Petty, 2nd Earl of Shelburne. in 1867, the buildings were remodelled by John McCurdy, including Nos.30-31, and largely takes the external form seen today. The studio of M. M. Barbezet of Paris cast the four external statues, two Nubian Princesses and their shackled slave girls. Two additional storeys (one a mansard) were added by Kaye-parry & Ross in the early 1900s.

Thackerey stayed here in 1842, including a sketch from his room in his book Irish Sketch Book, published in 1843. In the early 1900s, Alois Hitler, Jr, the half brother of Adolf Hitler, worked in the hotel while in Dublin.