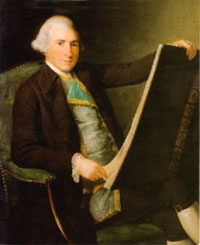 Robert and his brother James Adam set up a practice in London in 1758, developing there an integrated style, an elegant sense of proportion and unified facades such as in Portland Place and the Adelphi. In 1762 Robert Adam was appointed as a royal architect and became the most fashionable architect in England designing many stately British homes and public buildings. He had a great impact on interior design with elaborate plaster work and neo-classical figures.

Adam spent the last ten years of his life in Scotland where he influenced the design of the New Town, Edinburgh, particularly in the Charlotte Square and also Register House and the Old College of Edinburgh University. A high point in Robert’s work was Culzean Castle for the Earl of Cassilis. Robert Adam is buried in Westminster Abbey. He influenced a whole generation of architects with which he name became linked- the Adam style or Adamesque.