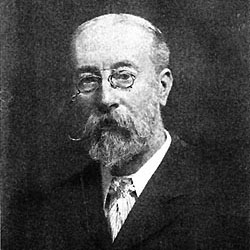 Belcher was born in Southwark, London. His father (1816-1890) of the same name was an established architect. The son was articled with his father, spending two years in France from 1862 where he studied contemporary architecture. In 1865 he was made a partner with his father, who retired in 1875. His first work to be built was in the City of London, the 1865 Royal Insurance building in a French Renaissance style (razed 1913). Also in London he designed the 1870 Mappin & Webb building in Gothic style on the corner of Queen Victoria Street and Poultry demolished in 1994 and replaced with the No 1 Poultry Building, and was joint architect, with his partner John James Joass, of Whiteleys department store.

In 1890 he designed the hall of the Institute of Chartered Accountants, which was one of the first Neo-baroque buildings in London. It featured extensive sculptural work by Sir Hamo Thornycroft, Harry Bates and others, consisting of several high-relief panels as well as stand-alone statues. Belcher’s major commissions outside London include Colchester Town Hall 1898-1902 and the Ashton Memorial, designed and built 1906-1909 in Lancaster. Both of these are in the Baroque style, typical of the lavish creations of the Edwardian era.

In 1907 Belcher won the Royal Gold Medal of the Royal Institute of British Architects, and published Essentials in Architecture: An Analysis of the Principles & Qualities to be Looked for in Architecture. He died at Champion Hill, Dulwich on 8 November 1913 and is buried at West Norwood Cemetery. After his death his practice was taken over by John James Joass, his partner since 1905.